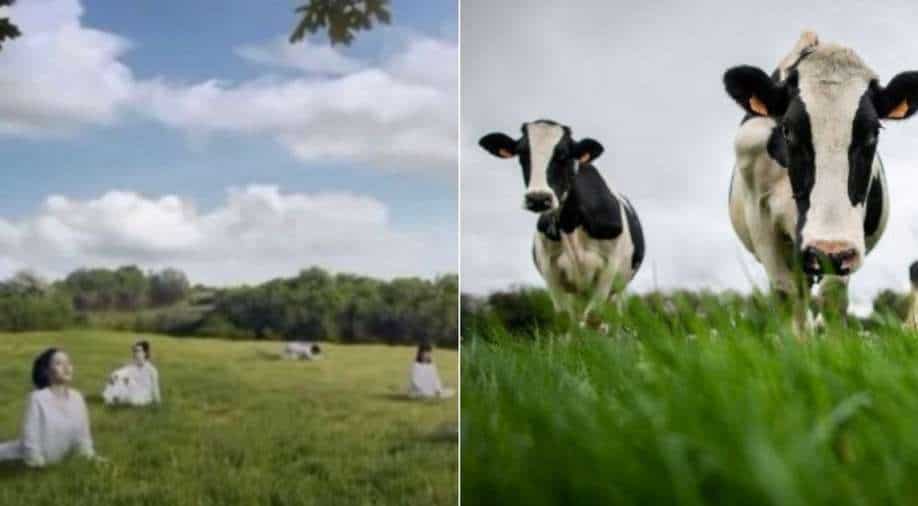 Some screenshots of the controversial now-deleted advert are available on social media. Photograph:( Twitter )

Seoul Milk said that they are accepting the matter seriously and will conduct an internal review. They also promised to take extra care to prevent similar incidents from occurring in the future

A South Korean dairy giant, Seoul Milk, has apologised over a controversial advert that went viral on social media forums, with a group of users slamming the advertisement for being sexist. Instead of being creative, the ad faced backlash for rather being bizarre.

The firm also informed that they will conduct an internal review.

In the advertisement, a man was seen secretly filming a group of women portrayed as dairy cows. As per a report by The Korea Herald, the ad was uploaded on Seoul Milk's YouTube channel on November 29 and was removed on December 8.

Critics have pointed out two crucial aspects of the ad that appeared problematic to them. First, the portrayal of women as dairy cows. Second, the promotion of a crime known as "molka". It means men secretly filming women without their consent, which is quite a big issue in South Korea.

ALSO READ |  Now, people can send and receive messages from their face through smart glasses

Taking to its official website, Seoul Milk's parent company Seoul Dairy Cooperative said as quoted by The Korea Herald: "We sincerely apologise to everyone who may have felt uncomfortable due to the milk advertisement video uploaded to the official YouTube channel of Seoul Milk on the 29th of last month."

The statement added: "We are accepting this matter seriously and will conduct an internal review, and take extra care to prevent similar incidents from occurring in the future. We bow our heads in apology."

Some screenshots of the controversial now-deleted advert are available on social media. In the ad, it was shown that a man is in the countryside, said to be in Cheorwon-gun, Gangwon province. He has a camera in his hand. The voiceover in the ad can be heard saying: "We finally succeeded in capturing their images in a place where nature has been kept clean."

ALSO READ |  Wikipedia co-founder sells NFT of first ever edit made on its site for $750,000

In another scene, the man is at a stream, where the women clad in white dresses are drinking the water. The narrator then said that "we decided to approach them [the women] cautiously, who're drinking clean water from clean nature, eating organic diet, and living peacefully in a pleasant environment."

The ad further showed that when the man tried to get closer to the women, who transformed into cows after the man accidentally stepped on a twig.

In a now-deleted ad from Seoul Milk, women turn into cows. Should I moo…🤦🏻‍♀️#서울우유 pic.twitter.com/XT0CxgdAGK

Seoul Milk CF taken down over controversy of women being depicted as cows https://t.co/SfQGMKs3xQ pic.twitter.com/UtKTZwxvi7

"This isn't the first time a Seoul Milk has made headlines for the wrong reasons. In 2003, the company staged a performance in which nude models sprayed yoghurt at each other."
https://t.co/UAAGDuJsp2 pic.twitter.com/xuvml7BvK7

South Korea's greatest dairy brand has been compelled to apologize over an advert portraying ladies as cows.
The video by Seoul Milk shows a man covertly recording a gathering of ladies in a field,https://t.co/eV4aUEWsoS pic.twitter.com/nB0uFWbwkQ