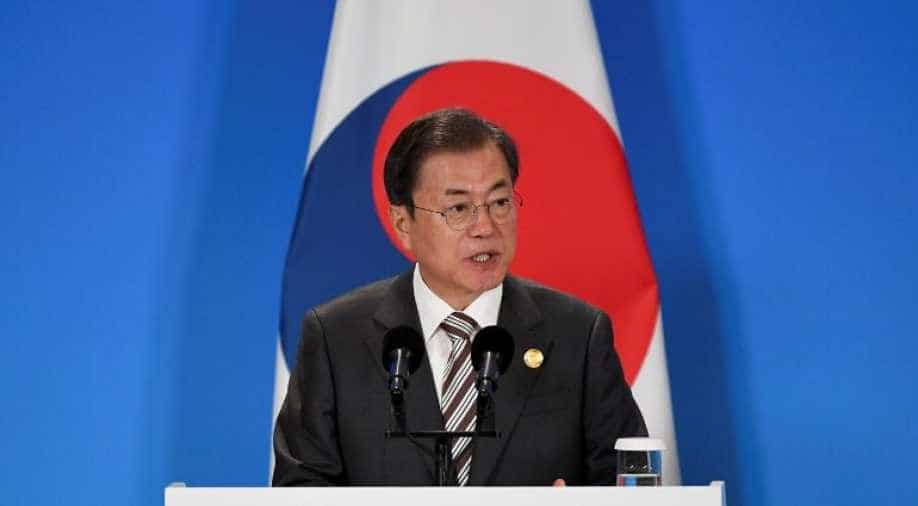 Moon, sidelined from his leading role in the diplomatic effort with North Korea in 2018, said he regretted the past year's lack of progress in negotiations.

South Korea's President Moon Jae-in said on Tuesday that there is a "desperate need" for practical ways to improve ties with North Korea and he was ready to meet with the reclusive leader in Pyongyang repeatedly if necessary.

Moon, sidelined from his leading role in the diplomatic effort with North Korea in 2018, said he regretted the past year's lack of progress in negotiations.

In an annual New Year's speech in Seoul, Moon called for new talks with Kim Jong Un and vowed to keep up work to facilitate US-North Korea communication.

"In a time of deadlock in US-North Korea talks and where we are even concerned about a step backward in inter-Korean relations, we are in desperate need of practical ways to improve inter-Korean cooperation," he said.

He also said he would continue to push for restarting the Kaesong Industrial Complex and tours to Mt. Kumgang, and mentioned border cooperation without elaborating. He added the joint 2032 Olympics bid would be a unifying event, as would completing the inter-Korean railroad.

"We want to make an era where separation is no longer a roadblock for peace and prosperity for South and North Korea," he said.

North Korea has been unresponsive to other recent overtures from Seoul, and cooperation projects between the neighbors have stalled in the face of international sanctions that bar most business with the North.

Pyongyang has expressed frustration at what it calls Washington's lack of flexibility, while US officials say it must take more concrete steps to dismantle its nuclear weapons and ballistic missile programs before sanctions are eased.

"The momentum for US-North Korea talks must continue," Moon said. "Provocations and threats are not helpful for anyone."

Over the New Year, Kim said he planned to further develop nuclear programs and introduce a "new strategic weapon" in the near future, though he signaled there was still room for dialogue with the United States.

Security and prosperity on the Korean peninsula are dependent on resolving international tensions, but the two Koreas could achieve progress through cooperation, Moon said.

"I suggest South and North Korea put our heads together," he said.