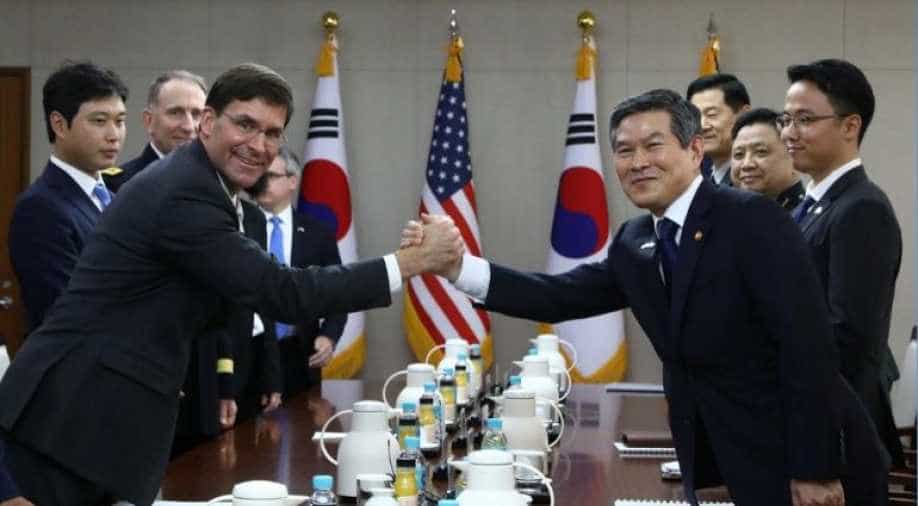 In recent weeks, North Korea has also threatened to take steps to nullity the 2018 deals meant to ease tensions at the border.

South Korea and the US have come together to urge North Korea to implement the disarmament pledges it made in past talks. The two countries are aiming at a complete denuclearisation from North Korea's side.

A joint statement was issued by South Korean Defense Minister Jeong Kyeong-doo and US Defense Secretary Mark T. Esper in which they stated that the two countries will continue diplomatic talks till North Korea denuclearises.

The statement came a day after North Korea blindsided everyone and announced a suspension of the plan that would have nullified 2018 tension-reduction deals and further raised animosities on the Korean Peninsula.

The defense chiefs, in the statement, said they "remain firmly committed to defending the hard-fought peace on the Korean Peninsula, to include supporting ongoing diplomatic efforts for the complete denuclearisation of the Democratic People's Republic of Korea."

The chiefs have also asked North Korea to keep in mind the US-North Korea summit talks in Singapore in June 2018 and inter-Korean talks in September 2018, while making any further decisions, in which Kim Jong Un had stated that his country "commits to work toward complete denuclearization of the Korean Peninsula."

The concerns regarding this started to rise after North Korea, last week, cut all its communication with South Korea after blowing up the South Korea-North Korea liaison office, and resumed its military drills near the border, and propaganda fliers were spotted towards South.

In recent weeks, North Korea has also threatened to take steps to nullity the 2018 deals meant to ease tensions at the border. Experts say North Korea is trying to pressure Seoul and Washington over the stalled nuclear diplomacy.

Kim Jong Un is yet to respond.