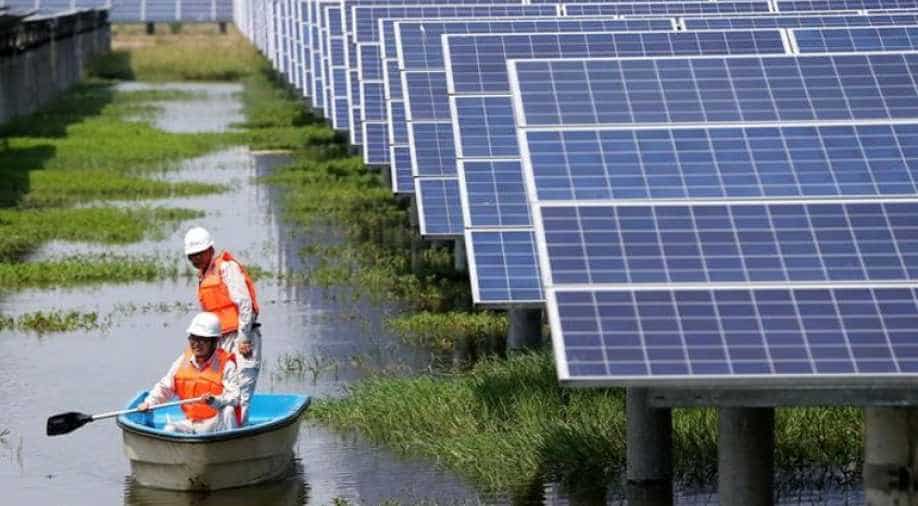 Employees row a boat as they check solar panels of a photovoltaic power generation project at a fishpond in Jingzhou, Hubei province. Photograph:(Reuters)
Follow Us

As per the report, nearly 45 per cent of the polysilicon manufacturers are based out of the Xinjiang area of China

Solar panels are a good way to contribute to reversing the effects of climate change. However, a recent report has claimed the manufacturing of these solar panels might not be good for human rights.

A study by the UK’s Sheffield Hallam University reports the majority of the solar panel manufacturing is being done by the forced labour of the Uighur community in China’s Xinjiang area.

As per the report, nearly 45 per cent of the polysilicon manufacturers are based out of the Xinjiang area of China, where the Uighur community is allegedly tied in forced labour by the Chinese government.

The researchers claimed the Chinese government is making the Uighur labour work in "an environment of unprecedented coercion, undergirded by the constant threat of re-education and internment," the report reads.

Experts have also alleged that many of the manufacturing companies are benefitting from the companies and authorities that employ the minority groups in absolute inhumane conditions.

It "determined that many of the major Chinese producers of raw materials, solar-grade polysilicon, ingots and wafers integral to solar module manufacturing are operating facilities in the region that have employed forced labour transfers of the indigenous people of the region, and that many of these manufacturers have beneficial relationships with the Xinjiang Production and Construction Corps," the report alleged.

"These manufacturers’ adoption of compulsory labour has a significant impact on downstream producers of solar modules and for the governments, developers, and consumers who buy them," it added.

In the report, the experts have identified at least 90 Chinese and other international companies with ties to forced labour. The aim of the report, as per the researchers, is to urge these companies to procure the material from some other place, rather than encouraging forced labour by associating their supply chain to the Xinjiang area.

The examples and facts stated in the report "are meant to provide stakeholders with the evidence based upon which to judge risk of exposure to forced labour in the solar supply chain," experts said.