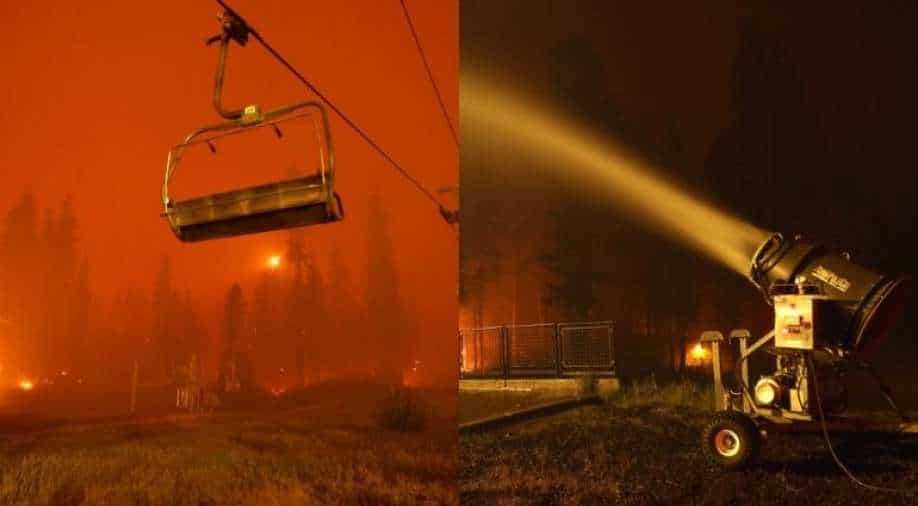 A snow machine blows water on a structure at Sierra-at Tahoe ski resort as the Caldor Fire moves through the area in Twin Bridges, California. Photograph:( AFP )

In a unique attempt, a Lake Tahoe-area ski resort gave everything it got by using snowmaking equipment to protect the property when the flames of California’s Caldor fire approached

This year seems to be a tough one for firefighters around the world. Be it Greece or California, several countries have faced the devastating wildfires this year.

From planes to water cannons, the firefighters have used numerous methods to douse or control the fires. In a unique attempt, a Lake Tahoe-area ski resort gave everything it got by using snowmaking equipment to protect the property when the flames of California’s Caldor fire approached. The staff actually used every tool they could.

The 2,000-acre Sierra-at-Tahoe's staff spent days preparing to defend the resort, which lies west of South Lake Tahoe, from the wildfire. It was rapidly advancing in the region.

They created defensible space around buildings, sealed air ducts to keep out embers and repurposed water hydrants, which were normally used to make snow, to douse buildings with water when the blaze may reach the property, the San Francisco Chronicle reported.

Also Read | UN report: Despite a decline in deaths from weather-related events, the economic cost rises

John Rice, resort manager, told Chronicle, “It came in from the west side, almost a bullseye right towards us, this big wall of fire.”

Before reaching the Lake Tahoe basin on Monday, the wildfires bore down on the resort on Sunday evening. The hydrants were used to spray the buildings to save them.

The fire crews also used the snow-making machines to douse the ground later.