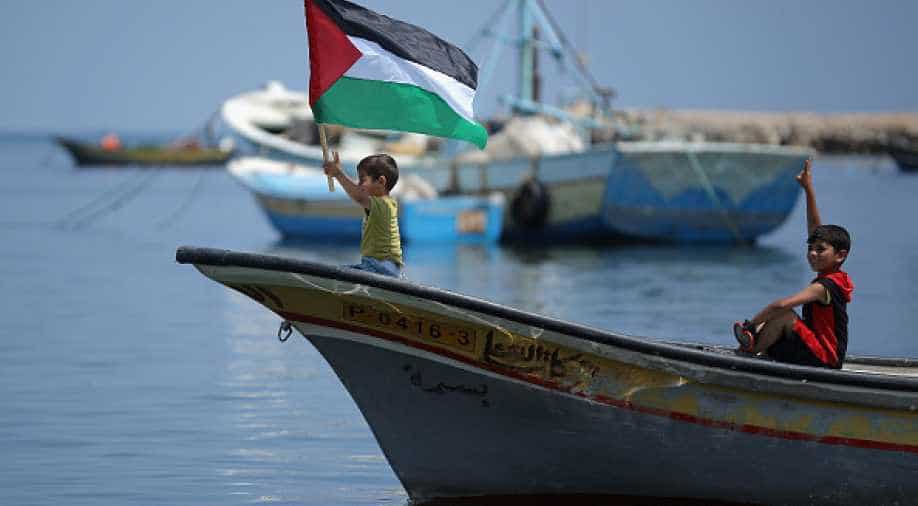 A file photo of a child holding a Gaza flag in a boat. Photograph:( Others )

Sinwar, Hamas leader in Gaza since 2017, was freed in a 2011 prisoner swap with Israel after spending more than 20 years behind bars on charges that included killing suspected informants against Palestinian militants

Yehya Al-Sinwar has been re-elected to head Hamas in the Gaza Strip for a second term, officials said on Wednesday, reflecting his control over both political and military wings of the Islamist group that rules the Palestinian enclave.

Sinwar, Hamas leader in Gaza since 2017, was freed in a 2011 prisoner swap with Israel after spending more than 20 years behind bars on charges that included killing suspected informants against Palestinian militants.

While he supports Hamas' opposition to co-existence with Israel, Sinwar has maintained a relatively stable standoff across the Gaza border.

He has also sought improved ties with Egypt, which maintains restrictions along its frontier with Gaza, a small Mediterranean coastal territory.

"Sinwar's victory shows the man maintains a strong grip on things inside the movement, especially within its vital components such as the military wing," said Gaza political analyst Adnan Abu Amer.

"The win will enable Sinwar to pursue his policies, whether inside Gaza or with regional countries and the handling of the conflict with Israel."

Sinwar's main challenger in the election, which is only open to Hamas members including those in Israeli prisons, was Nizar Awadallah, a long-time official and co-negotiator of the 2011 swap deal.

In a statement issued by Awadallah, he stressed his support for Sinwar, saying: "We stand by his side in every position to achieve the goals of our project and our movement."

Hamas has yet to elect a leader for the Israeli-occupied West Bank. Sources said his identity would be kept secret as protection against Israel or the administration of Palestinian President Mahmoud Abbas, a Hamas rival.

Filling the position of Hamas’s political chief, who also speaks for its military wing, will require more time. The overall leader of Hamas is Ismail Haniyeh, who is also based in Gaza.

Haniyeh is facing a challenge this time by the former head of the group, Khaled Meshaal, who lives in Qatar.