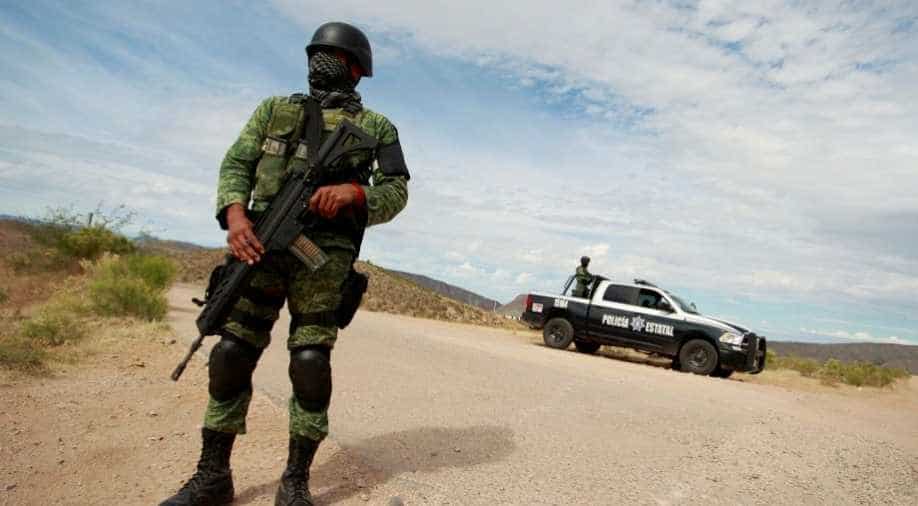 A soldier assigned to the National Guard is pictured at a checkpoint as part of an ongoing security operation by the federal government near the Mexican-American Mormon community of La Mora, Sonora state, Mexico. Photograph:( Reuters )

Riding into town in a convoy of heavily armed pickups, gunmen sprayed the offices of the mayor of Villa Union with bullets and fought police for more than an hour.

Clashes between police and suspected cartel gunmen in a northern Mexican town killed 21 people this weekend, authorities said, adding fuel to a debate sparked by US President Donald Trump, who has vowed to designate the gangs as terrorists.

The government of the northern state of Coahuila said local security forces killed seven gunmen early on Sunday, adding to 10 others who were shot dead during exchanges in and around the small town of Villa Union not far from the Texas border.

Four police were also killed and six wounded in the shootouts, which stunned residents of the town around midday on Saturday, sparking alarm on social media and fresh criticism of the government's approach to handling the powerful gangs.

Riding into town in a convoy of heavily armed pickups, gunmen sprayed the offices of the mayor of Villa Union with bullets and fought police for more than an hour.

Heavy gunfire echoed through the town on videos broadcast on social media and local television.

Most of the downed gunmen, who were suspected members of the Cartel of the Northeast from Tamaulipas state to the east, were killed by state police in pursuit of the raiding party after it fled the town, Coahuila's government said.

The events in Villa Union add to a series of recent security lapses that have raised questions about the containment strategy of President Andres Manuel Lopez Obrador, who took office a year ago pledging to get a grip on chronic gang violence.

Lopez Obrador said on Friday he would not accept foreign intervention in Mexico to deal with the cartels in response to Trump's comments earlier in the week.

Lopez Obrador's remarks were supported on Saturday by Coahuila state governor Miguel Angel Riquelme. While pledging to act decisively against the gangs, he said that Mexico needed "collaboration and cooperation", not intervention from abroad.

US Attorney General William Barr is due to visit Mexico next week to discuss cooperation on security.

A veteran leftist, Lopez Obrador has pledged to pursue a less confrontational policy to subduing the gangs. He is due to hold a speech reviewing his first year in office later on Sunday.

US and Mexican criticism has focused on the November 4 massacre of nine women and children of US-Mexican origin from Mormon communities in northern Mexico, and the armed forces' release of a captured son of drug lord Joaquin "El Chapo" Guzman under pressure from cartel gunmen in the city of Culiacan.

Coahuila has a history of gang violence, although the homicide total in the state is well below where it was seven years ago. National homicide figures are pushing record levels.