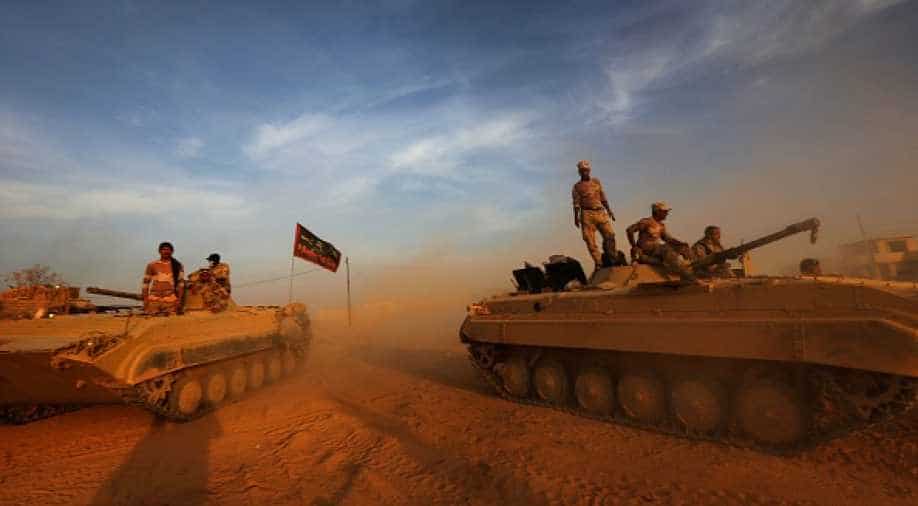 Members of the Iraqi forces stand on their fighting vehicles near Mosul. (Representative image) Photograph:( Getty )

The Popular Mobilisation Forces, or Al-Hashd Al-Shaabi, have reclaimed the town of Tal Afar and cut off the last of remaining supply routes to Mosul, the last stronghold of Islamic State in Iraq.

The road crossing Tal Afar -- located 70 kilometres west of Mosul -- was the last hope for IS militants to escape to Syria or receive fresh supplies of ammunitions, food or cooking oil.

Shia militia Al-Hashd Al-Shaabi's success means that the city of Mosul has been completely isolated, a major blow for IS fighters both in strategical and psychological aspects.

Shia paramilitary forces have been active in offensives against Islamic State in Tikrit, Ramadi and Fallujah.

But they have been accused by the United Nations of perpetrating heinous war crimes against the local Sunni inhabitants suspected to have supported the Islamic State -- allegations that have been stoutly repudiated by the Shia forces.

Members of groups affiliated to Al-Hashd Al-Shaabi like the Badr Brigade and the Liwa al-Munthadir who met this reporter said such allegations were chiefly being circulated by the fleeing IS jihadists to create mistrust between them and the hitherto besieged civilians.

However, there are concerns that the participation of Shia-dominated militias in the fight against IS is helping them consolidate their political legitimacy -- a development that could further worsen matters in the mostly-Sunni Muslim towns and villages in the region.

Al-Hashd Al-Shaabi is an umbrella organisation, made up of several Shia-dominated groups.

Some groups are relatively young. They formed in 2014 after the leader of the Iraqi Shia community, imam Al-Sistani, called upon his followers to take up arms against Islamic State.

Other groups like the Badr Brigade have had a long tradition in Iraqi politics. Badr Brigade was created in 1982 as a paramilitary group linked to the Supreme Council for the Islamic Revolution in Iraq (SCIRI), an organisation established in Iran in 1980. They were one of the main Shia organisations leading the resistance against the Sunni-led dictatorship of Saddam Hussain.

After the US invasion of Iraq in 2003 and the toppling of the regime, many members of the Badr Brigade joined the armed forces and the federal police and gained legitimacy and influence in the country’s political arena. Badr which has been allied to SCIRI party for long, currently holds 22 seats in the Council of Representatives of Iraq.

Drawing a comparison, the Badr Brigade in Iraq resembles Lebanon’s Hezbollah, an armed party active within the society and in full control of large swathes of the country.

The Al-Hashd Al-Shaabi’s galaxy has also other groups openly linked with Iran, among which is the Kata’b Hezbollah. The group has a secret structure but it is believed that the Shiite Iraqi military commander Jamal Jaffar Mohammed Ali Ebrahimi, known by his nome de guerre Abu Mahdi al-Muhandis, is a prominent member of the group. He is believed to have direct links with the Iranian special forces.

Due to the political, religious and military vicinity to Iran, the organisation is often perceived as Teheran’s proxy army in Iraq -- a group through which Iraq's Shia neiighbour is trying to expand its sphere of influence in the Middle East.

Militias of the Al-Hashd Al-Shaabi now control a wide expanse of territory -- from the city of Qayyarah, south to Mosul, up to Tal Afar. That means the majority of southern and western Iraq are now partially under their control.

However, their presence is not all-encompassing. They are in constant coordination with the Iraqi Army, as Major General Najim Al-Jabouri, commander in chief of the Niniwah Operation, told WION during his last interview before the beginning of the Mosul offensive.

It is important to remember that it is the Iraqi Army that is the mother ship of the current campaign against IS.

During a four-day trip inside Shia-controlled territories, this reporter directly witnessed several high-ranking officers of the Iraqi Army inspecting and meeting members of the Al-Hashd Al-Shaabi, meaning that there is an established relation between the two forces.

But there is more to it than meets the eye. A visible majority of the Iraqi Army vehicles carry a flag representing Imam Hussain, the holiest figure for Shia Muslims. Soldiers told WION that they carry it as a badge of protection during the battles, but the symbolism suggests that the Iraqi army is mainly composed of Shia Muslims who are not afraid to show their presence.

Even if Al-Hashd Al-Shaabi is currently fighting against Islamic State and helping the local populace to return to their villages by clearing hidden bombs in the area, their presence might inflame sectarian passions.

Western Iraq is a majority Sunni area and the prospect of being ruled by Shia-led organisations will not be liked by many local tribes, which could potentially transform the region into a tinderbox.