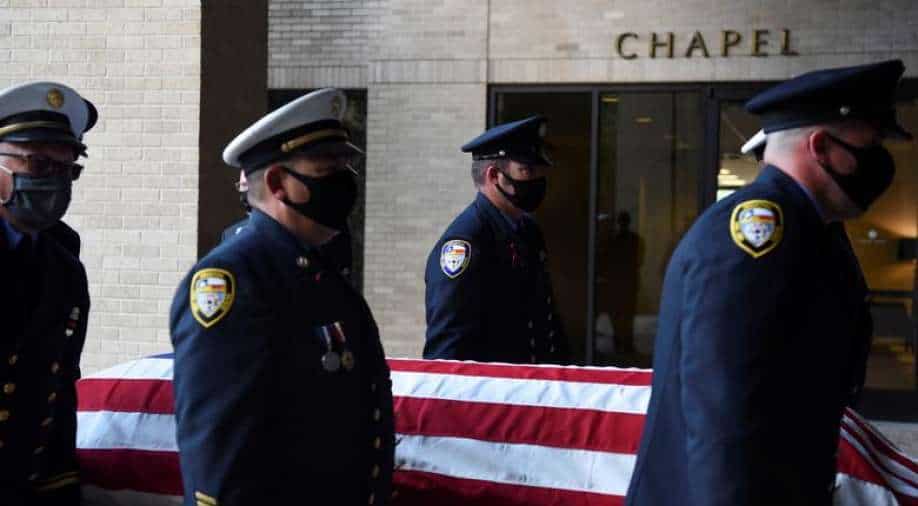 Police in Allen, Texas, just north of Dallas, arrested Scott on a marijuana possession charge on March 14. He had less than 2 ounces of the drug, according to the authorities — a misdemeanor.

Seven sheriff’s officers in Collin County, Texas, were fired Thursday in connection with the death of Marvin Scott III, a 26-year-old Black man who died after being restrained at the county jail last month.

“Evidence I have seen confirms that these detention officers violated well-established Sheriff’s Office policies and procedures,” Sheriff Jim Skinner said in a statement, adding that an eighth officer had resigned.

Police in Allen, Texas, just north of Dallas, arrested Scott on a marijuana possession charge on March 14. He had less than 2 ounces of the drug, according to the authorities — a misdemeanor.

The police said they had taken Scott to a hospital because he was acting erratically. He was then taken to the county jail, where county officers restrained him and pepper-sprayed him. A spit hood was placed over his head. He died later that night.

Every evening for more than two weeks, members of Scott’s family have been gathering to protest outside the Collin County Jail, demanding transparency and accountability.

“We want to know, how did my son die?” Scott’s mother, LaSandra Scott, said at a news conference last week, according to NBC 5. “We want answers.”

Marvin Scott had a schizophrenia diagnosis and sometimes used marijuana as a form of self-medication when his prescription medication did not work well, according to S. Lee Merritt, a lawyer representing the family.

Amy Gruszecki, a forensic pathologist who performed a second autopsy on Scott after his body was examined by the Collin County medical examiner, said at the news conference that according to her preliminary findings, it was possible that asphyxiation, as well as a physical struggle against his restraint, might have contributed to Scott’s death.

The county medical examiner did not immediately respond to a request for comment Thursday. Merritt said the county’s autopsy results had yet to be released.

The officers who were fired Thursday had been placed on administrative leave after Scott’s death. The sheriff’s office opened an internal investigation into the episode, and the Texas Rangers, a state law enforcement agency, is conducting a criminal investigation.

Merritt said the family was asking for the officers involved to be arrested and for the release of security camera footage from the jail on the night of Scott’s death.

“They laid Marvin to rest on the 30th, just a couple days ago,” he said. “The family continues to protest every night along with other members of the community.”

The firings in Texas were announced during the trial in Minnesota of Derek Chauvin, the former Minneapolis police officer who knelt on George Floyd’s neck before Floyd died on May 25, prompting nationwide protests. Holding law enforcement officers accountable in the United States has long been difficult, in part because of powerful police unions and a legal system that gives wide latitude for officers to use force.

At a March 19 news conference, Skinner called Scott’s death a tragedy and said he had met with Scott’s relatives.

According to a statement from the Allen Police Department, police officers encountered Scott on March 14 while responding to a disturbance call at an outlet mall and “were concerned for his safety due to the possible ingestion of drugs.”

Scott was taken to an emergency room, where he remained for three hours before being released with a physician’s clearance, the police statement said. It added that he had been taken to the police headquarters in Allen before being transferred to the Collin County Jail in McKinney.

Skinner said the police had taken Scott to the county jail shortly before 6:30 p.m. “While in the booking area, Mr. Scott exhibited some strange behavior,” he said. “Several detention officers tried to secure him to the restraint bed, and during the process used O.C. spray once, and also placed a spit mask on his face.”

O.C. spray — its formal name is oleoresin capsicum — can also be referred to as pepper spray. Skinner described a spit mask as “a mask that fits over one’s head. It has a net on it in order to keep spittle from being spit on another person.”

The sheriff said that Scott had become unresponsive around 10:30. He added that the Texas Rangers, who did not immediately respond to a request for comment Thursday evening, were examining video footage of the episode.