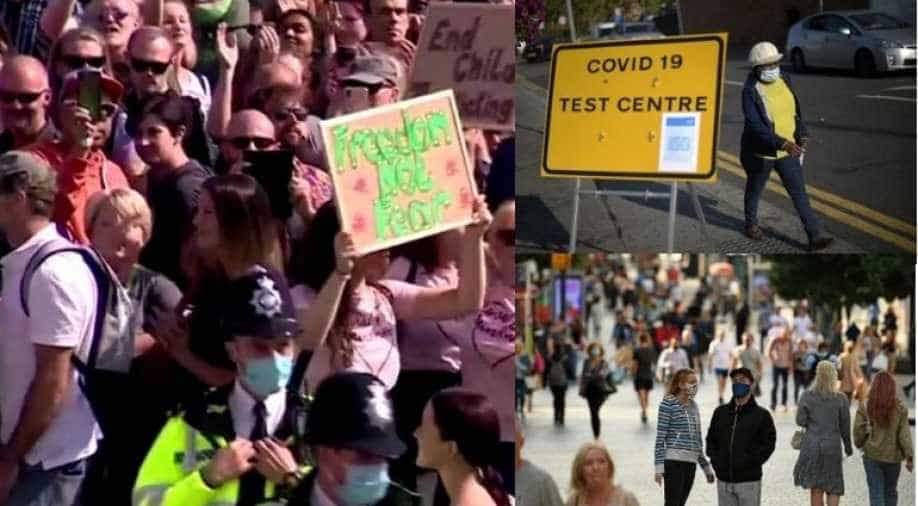 The government had earlier in the week announced tighter restrictions in the northeast, northwest, northern and central England amid a spike in cases.

Anti-lockdown protesters took to the streets in London's Trafalgar Square as the government said it might reintroduce some national COVID-19 measures amid surge in virus cases.

Prime Minister Boris Johnson had said earlier that the UK was facing an "inevitable" second wave of infections.

"We are seeing it in France, in Spain, across Europe -- it has been absolutely, I'm afraid, inevitable we were going to see it in this country," the British prime minister said. Johnson, however, added a second lockdown would be "financially disastrous" while adding that it was the "the last thing anybody wants".

Britain has reported over 41,000 deaths due to the virus which is one of the highest in the world. The government had earlier in the week announced tighter restrictions in the northeast, northwest, northern and central England amid a spike in cases.

"There's no question, as I've said for several weeks now, that we could expect and are now seeing a second wave coming in," Johnson added as Britain's Office for National Statistics (ONS) said that the "the incidence rate for England has increased in recent weeks".

Earlier reports had claimed that hospitalizations had doubled in recent weeks amid the rising number of cases. Public health England medical director Yvonne Doyle had warned that "this could be a warning of far worse things to come."