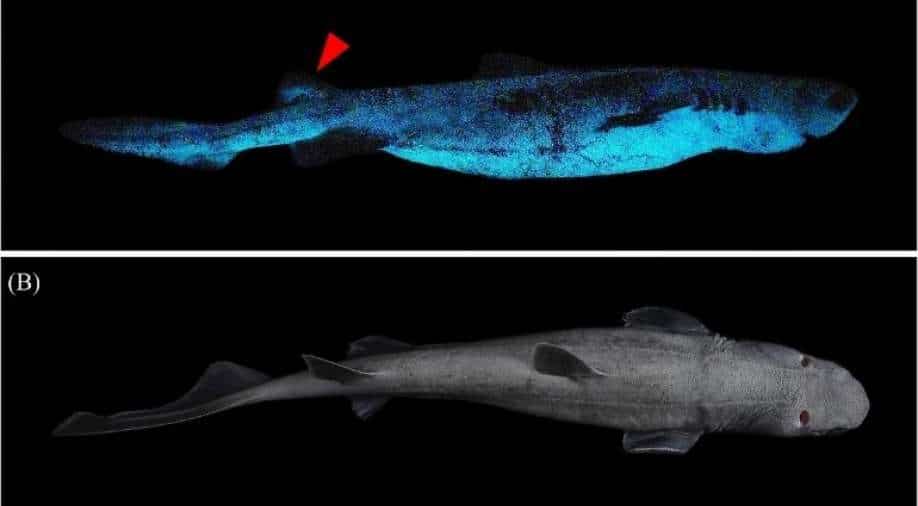 This first experimental study of three luminous shark species from New Zealand provides an insight into the diversity of shark bioluminescence and highlights the need for more research to help understand these unusual deep-sea inhabitants: the glowing sharks

Researchers have discovered three deep-sea sharks that glow in the dark, including one that is the largest known luminous vertebrate in a recent study.

Bioluminescence has often been seen as a spectacular yet uncommon event at sea but considering the vastness of the deep sea and the occurrence of luminous organisms in this zone, it is now more and more obvious that producing light at depth must play an important role in structuring the biggest ecosystem on our planet.

Bioluminescence is defined as the production of visible light by living organisms. This living light, also called cold light, occurs through a biochemical reaction; the oxidation of a substrate, a luciferin, by an enzyme, the luciferase, or through a stabilized complex called photoprotein.

Three species of deepwater sharks were found from the Chatham Rise, an area of the ocean floor to the east of New Zealand.

This first experimental study of three luminous shark species from New Zealand provides an insight into the diversity of shark bioluminescence and highlights the need for more research to help understand these unusual deep-sea inhabitants: the glowing sharks.

The three studied shark species inhabit the mesopelagic zone. Therefore they face an environment with no place to hide, hence the need for glowing camouflage or counterillumination. The mesopelagic zone, often called the twilight zone, ranges from 200 to 1000 m depth (maximal depth of solar light penetration) and is the realm of bioluminescence.

At 200 m the residual solar light is considered too weak to initiate photosynthesis but organisms living there are well adapted to see in low light conditions.

Mesopelagic cephalopods, sharks and bony fishes have large eyes with specialized structures such as a large iris, a tapetum, huge rod density, high content of opsins (rhodopsin and chrysopsin), and an elevated integration rate at the optical nerve which allows them to perceive very low light levels down to 800 m depth.

This control is assumed to have been successfully and evolutionary co-opted from shark melanophore pigment motion control by a common ancestor of these two squaliform families.

The results of the study support evolutive conservation of light organ morphology and luminescence control.