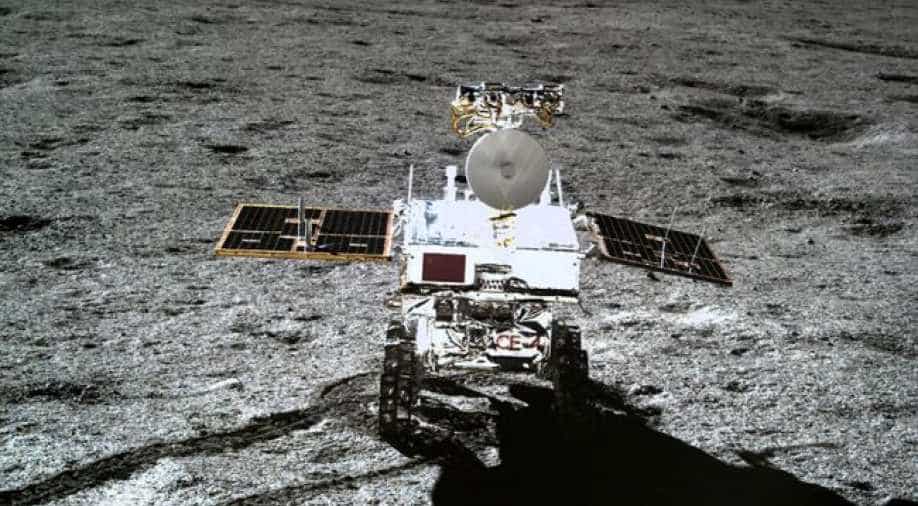 Chang'e 4 rover on the moon (Photo Credit: CNSA) Photograph:( Others )

The Chang'e 4 spacecraft landed on Moon on January 2, 2019, becoming the first probe to reach moon's far wide surface that has always turned away from the Earth

China's lunar rover Yutu-2, or Jade Rabbit-2, that has become the first rover to land on the far side of the moon, is unveiling new lunar secrets, according to a study.

The Chang'e 4 spacecraft landed on Moon on January 2, 2019, becoming the first probe to reach moon's far wide surface that has always turned away from the Earth.

Jade Rabbit-2 that has completed more than a year on the lunar surface, is revealing new insights about it, as per the study published on Wednesday in the journal Science Advances.

The study conducted by a research team led by Li Chunlai and Su Yan at the National Astronomical Observatories of China (NAOC) sheds light on what exists below the lunar surface.

The rover found out that the crater is full of loose deposits of pulverized rock and dust, 40 feet thick, similar to what astronauts from Apollo mission discovered.

Jade Rabbit-2 consists of Lunar Penetrating Radar (LPR), through which it could probe the moon using radio signals to a depth of 131 feet beneath lunar surface. Its depth was three times that of China's previous mission, Chang'E-3.

The results from the LPR during the first two lunar days of the operation provide the first electromagnetic image of the subsurface structure of the far side of the Moon and the first "ground truth" of the stratigraphic architecture of an ejecta deposit, said Chunlai.

"The first layer is a fine 12-meter soil layer below the surface. The second layer between 12 and 24 meters under the ground has a lot of stones and the strongest radar echo. It even forms a stone layer and stacks of loose stones. There are three gravel stacks. The third layer is 24-40 meters under the surface. Radar echo shows its dark and bright parts, so there are granules and scattered stones," said Su Yan.

Embedded boulders, in a lot of sizes, were found along with porous, granular material, which is likely caused as the moon was often hit by meteors and other debris during the initial days of our solar system.

Scientists have now been trying to understand the composition of the lunar mantle, which exists between the crust and the core, and when asteroids and other objects collide with the moon, the crust is cracked and pieces of the mantle reach the surface.

Meanwhile, Chang'e 4 rover is continuing its probe and the team is working out the possibility of bringing back samples to Earth.