Saudi-led coalition denies it carried out airstrikes in Yemen 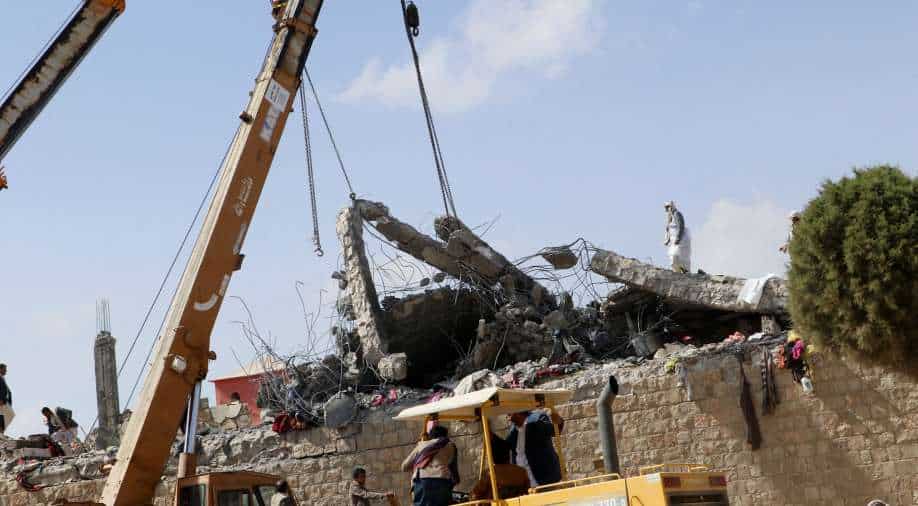 Rescuers use cranes to lift the collapsed roof of a detention center hit by airstrikes in Yemen  Photograph:( Reuters )

The airstrikes were conducted on a prison in Houthi territory in Saada including a telecommunications facility in which at least three children were reportedly killed.

UN Secretary-General Antonio Guterres condemned the airstrikes allegedly conducted by the Saudi-led coalition forces on Yemen in which at least 70 people were killed.

The airstrikes were conducted on a prison in Houthi territory in Saada including a telecommunications facility in which at least three children were reportedly killed. Reports said over 100 people were injured in the strikes.

Also Read: US and UK condemn Yemeni drone attack on Abu Dhabi that killed 3, including Indians

The Saudi-led coalition denied it carried out the airstrike in the prison area in northern Yemen calling it "baseless and unfounded".

The attack also hit the internet services. Guterres said the "escalation needs to stop" even as he condemned the attack by  Houthi rebels on Abu Dhabi.

Rescue work is underway in the prison area as reports said bodies were being pulled out of the rubble. The Saudi-led coalition has intensified attacks on the Houthi military targets in the past year amid drone attacks on Saudi cities including its oil facilities.

The Iran-backed rebels had conducted an attack on the United Arab Emirates on Monday. The conflict in Yemen arose after the Houthis overthrew the government in Sanaa in 2015 as the Saudi backed coalition intervened.

The UAE ambassador to the UN Lana Nusseibeh said the coalition is committed to "proportionate response in all its military operations" in its fight against the Houthi rebels.

Meanwhile, the US urged all sides to de-escalate and abide by "obligations under international humanitarian law" and to participate in the UN peace process.