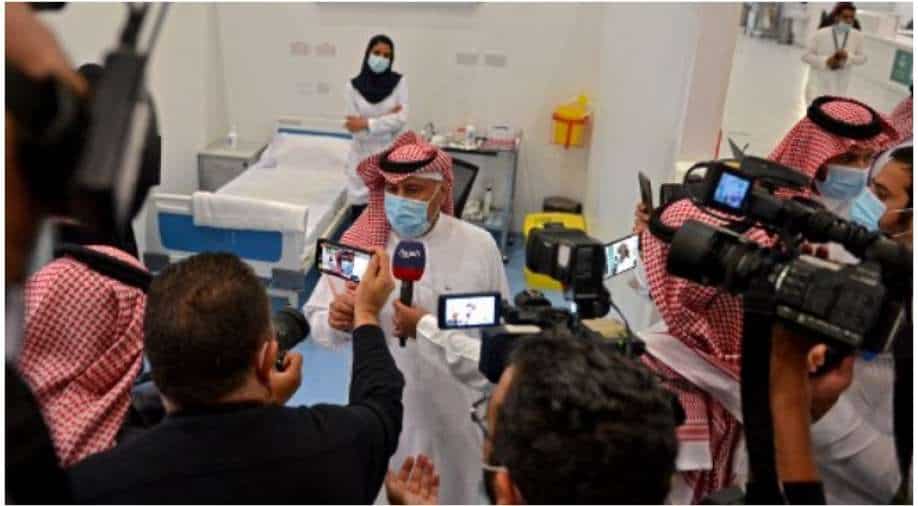 The first Saudi citizen receiving the Pfizer-BioNTech COVID-19 coronavirus vaccine (Tozinameran) speaks to reporters after its administration at a vaccination centre supervised by the health ministry in the capital Riyadh Photograph:( AFP )

Saudi Arabia has so far recorded more than 360,000 novel coronavirus cases, including more than 6,000 deaths –- the highest among the Gulf Arab states. But the kingdom has also reported a high recovery rate.

Saudi Arabia kicked-off its three-phase coronavirus vaccination programme on Thursday. The country's health minister was among those inoculated after first shipment of Pfizer-BioNTech vaccine arrived in the kingdom.

Along with Health Minister Tawfiq al-Rabiah, a woman in a wheelchair and another man were among the first to be administered the vaccine at a centre in Riyadh, an AFP photographer reported.

"This is the beginning of the end of the crisis," Rabiah told reporters.

In the first stage, people aged over 65 and those with chronic ailment or high risk of infection will receive the vaccine. In second stage, those aged over 50 will be given the vaccine.

Everyone else will be vaccinated in the third phase.

The phases have been decided by the health ministry. It has not specified the dates for each phase or how long the mass vaccination would take. The ministry has said that the vaccine would be "free for all citizens and residents"

Last week, the kingdom approved the use of the vaccine developed by US pharmaceuticals giant Pfizer and its German partner BioNTech, becoming the second Gulf country to do so after Bahrain.

Britain, Canada and the United States have also approved the Pfizer-BioNTech vaccine and have already launched mass inoculation campaigns. Neighbouring Jordan green-lighted the drug on Monday.

Saudi Arabia has so far recorded more than 360,000 novel coronavirus cases, including more than 6,000 deaths –- the highest among the Gulf Arab states. But the kingdom has also reported a high recovery rate.