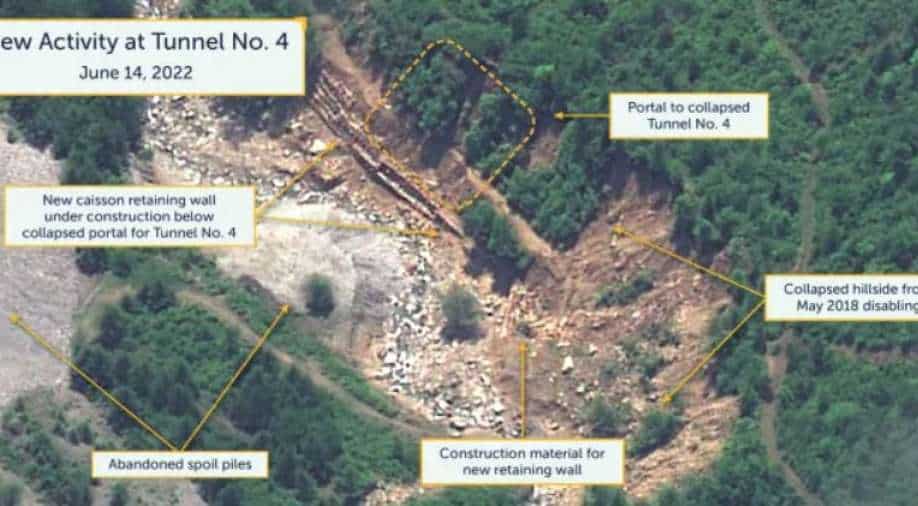 Overview of the new activity at Tunnel No. 4 in North Korea (Photo Courtesy: CSIS, Beyond Parallel) Photograph:( Others )

South Korea's foreign minister Jin Park had earlier claimed that "preparations for a nuclear test were completed" and only "political decision remains".

According to the Center for Strategic and International Studies, North Korea is preparing to conduct another nuclear test at the Punggye-ri test site.

The report said satellite images showed "refurbishment work and preparations" were underway at tunnel No. 3 which began nearly four months ago "are apparently now complete".

The think tank said new construction has been seen at tunnel No.4 "strongly suggesting an effort for potential future testing".

It added that the "timing" of the seventh nuclear test was "solely within the hands of Kim Jong-Un."

South Korea's foreign minister Jin Park had earlier claimed that "preparations for a nuclear test were completed" and only "political decision remains".

The think tank said a "new caisson wall under construction and construction materials" have been observed at tunnel 4. It found "no significant activity" in satellite images at tunnel No:3.

The think-tank informed that "ongoing activity in the main administration and support area" has been observed with storage buildings being renovated and "several new buildings are under construction". It also found visible "vehicle tracks".

The report said satellite images showed no indicators of activity at tunnels no.1 and 2.