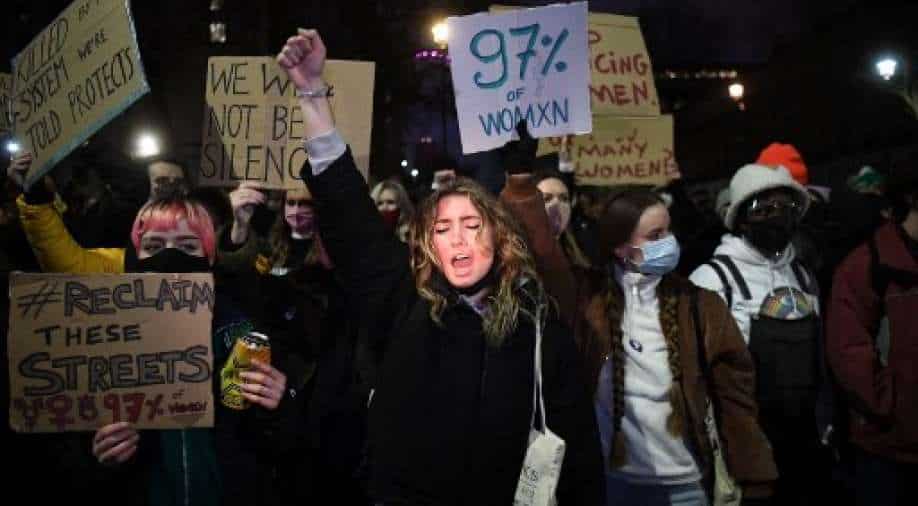 Protesters call for greater public safety for women after the death of Sarah Everard in London Photograph:( AFP )

British Prime Minister Boris Johnson on Monday backed London's police chief following outrage over her officers' handling of a vigil for a woman who was allegedly kidnapped and murdered by a member of the same force.

Johnson said he still had full confidence in Metropolitan Police Commissioner Cressida Dick but supported the internal and independent reviews launched into how officers handled the gathering on Saturday.

Hundreds including Kate Middleton, the Duchess of Cambridge, had assembled throughout Saturday to pay tribute to 33-year-old Sarah Everard, who disappeared on March 3 and whose body was found in woodland last week.

A Met police officer serving in the elite diplomatic protection unit has been charged with her kidnap and murder.

The force has agreed to launch an internal probe into its handling of the event, while interior minister Priti Patel has also asked a policing watchdog to "conduct a lessons learned review".

Johnson said officers had "a very, very difficult job" during the pandemic, but added that "there's no question that the scenes that we saw were very distressing".

"The reality is that, the country is united still in shock and grief about what happened to Sarah Everard, and we must do everything we can to find the answers," he said.

Dick was set later on Monday to join Johnson and several senior ministers at a meeting of a government taskforce examining crime and justice.

She has defended the vigil's "fiendishly difficult policing", saying on Sunday she was "more determined, not less" to remain in her post.

Everard's disappearance and death reignited a conversation about women's safety in public spaces in Britain.

Saturday's event had been banned on coronavirus safety grounds, and police said they moved in because of public health fears.

Patel told lawmakers the chaotic scenes were "upsetting" and said she had ordered the independent review "in the interest of providing greater assurance, and ensuring public confidence".

"I also think no one should prejudge anything in terms of conduct until we absolutely see what has happened in terms of that report," she added, noting it would be concluded in the next two weeks.

Patel also defended the government's record on female safety, noting that a domestic abuse bill set to be passed by parliament would "transform our collective response".

She added that a reopened government survey gathering views on the issue had gathered 78,000 responses since Friday.

As MPs debated the issue, hundreds gathered again Monday, this time in Parliament Square, to pay tribute to Everard. The crowd held banners and chanted as dozens of police officers looked on.

Meanwhile, the controversy over the vigil's policing came as the government tried to enact draft legislation granting officers greater powers to crack down on disruptive protests.

The opposition Labour Party, which has condemned Saturday's scenes, has indicated it will now vote against the bill on the grounds that it places "disproportionate controls on free expression".