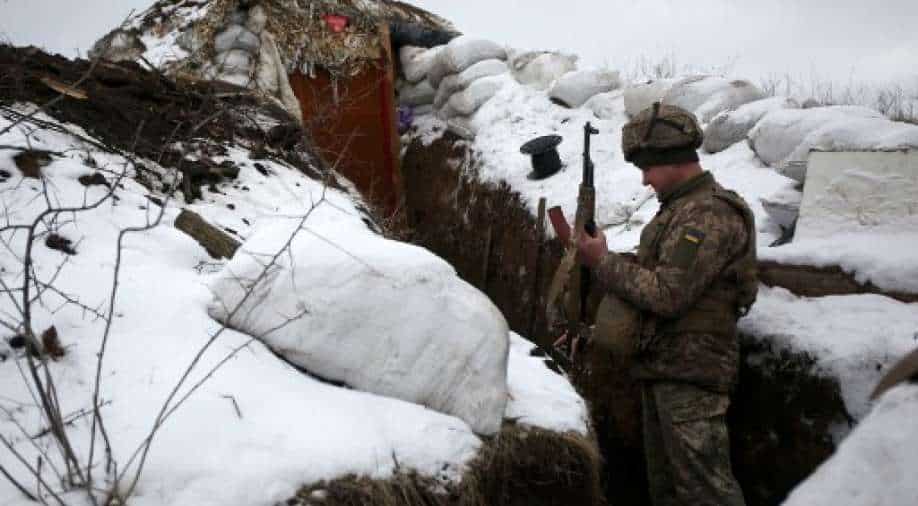 A Ukrainian serviceman at the Russian frontline near Zolote village in the eastern region. Photograph:( AFP )

The US State Department said on Thursday that secretary of state Antony Blinken told Chinese foreign minister Wang Yi that Russian aggression towards Ukraine would lead to "global security and economic risks".

Blinken told the Chinese foreign minister that "de-escalation and diplomacy" was the only way to resolve the crisis.

The US has repeatedly warned that Russia has massed over 100,000 along the Ukraine border with the intention to invade the country even as President Putin has dismissed the allegation asserting that Russian troops can move around anywhere inside the country.

Russia had submitted a security document to the United States and NATO last month directing them not to extend their border to Russia's eastern region referring to Ukraine's participation in the European military alliance.

The Biden administration has however rejected Russia's security demand while calling for a diplomatic solution.

"From our perspective, I can't be more clear - NATO's door is open, remains open, and that is our commitment," Blinken said while clarifying NATO's stand on future membership for Ukraine.

The Chinese foreign ministry backing Russia said the country's "reasonable security concerns should be taken seriously and resolved" while informing Wang told Blinken that "regional security cannot be guaranteed by strengthening or even expanding military blocs".

Meanwhile, Ukraine and Russian officials met in Paris on Wednesday and agreed to meet in Berlin again in two weeks. Ukraine described it as "good news".

NATO has put 8,500 troops on standby amid escalating tensions at the border between Ukraine and Russia. The US and EU have warned Russia of consequences including severe sanctions if Putin's regime invades Ukraine as NATO secretary-general Jens Stoltenberg said the alliance is "prepared for the worst".

Also Read: Normandy Format talks and how it can ease Russia-Ukraine crisis

Meanwhile, Ukraine's interior ministry said at least five people were killed after a national guard soldier opened fire at an aerospace factory in Dnipro after an attacker fired with a rifle and fled the area.