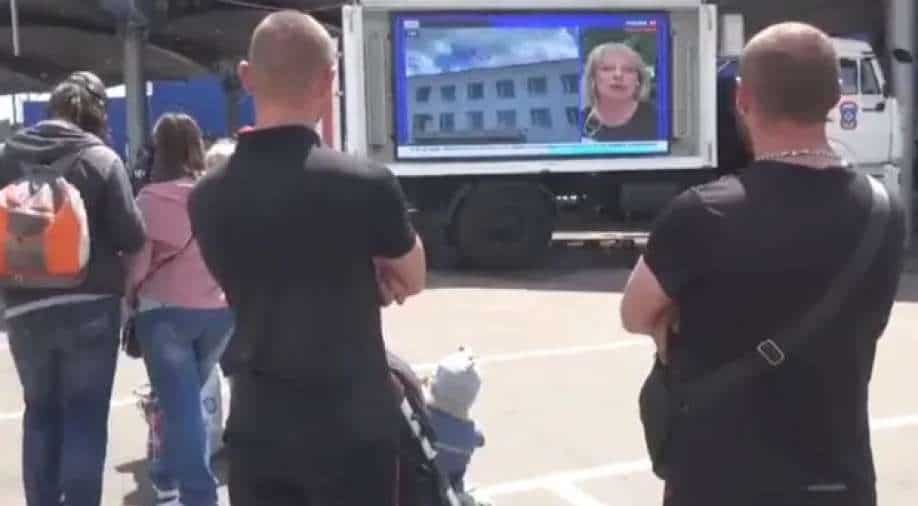 These vans, dubbed “mobile information complexes”, play state TV news segments and political chat shows where experts speak highly of the invasion in a city where there is no electricity and water

Russian troops are driving mobile propaganda vans with large-screen televisions at the captured Mariupol city of Ukraine in a bid to change their perception of the war and Moscow. Videos shared by the TASS news agency showed the vans, dubbed “mobile information complexes”, playing state TV news segments and political chat shows where experts speak highly of the invasion in a city which lacks electricity and running water and has been one of the victims of the worst shelling of the Ukraine war, which began on February 24. Three mobile complexes for informing the population are deployed in Mariupol, reported TASS.

"They broadcast news from federal and republican TV channels, provide background information to residents and show cartoons to children."

russians display propaganda from a van. Three such "propaganda vehicles" are driving around #Mariupol in an attempt to persuade people that their lives are being improved. Nevermind that a humanitarian catastrophe is unfolding
Source: advisor to #Mariupol town mayor pic.twitter.com/jyOt6ugVcU

According to the Guardian, these mobile screen vans have been deployed to places where Mariupol residents are receiving humanitarian aid, Russian documents, and at points in the city where drinking water is available.

“The practice of ‘there is nothing to eat, so feed them lies’ is gaining momentum,” wrote Petro Andryushchenko, an adviser to the Ukrainian mayor of Mariupol.

He called it “cynicism of the highest level”.

The press service of Russia's Ministry of Emergency Situations told TASS that the vans were deployed in the city because, for nearly three months, the "residents of Mariupol were in an information vacuum due to a lack of power supply."

Such an Orwellian move by Russia is an attempt to pacify and integrate captured cities like Mariupol despite earlier assurances by Vladimir Putin that Russia did not seek to occupy new territory in Ukraine, The Guardian reports.

It comes after Putin on Wednesday signed a law that would fast-track applications for citizenship from Mariupol, as well as the Ukrainian regions of Kherson and Zaporizhzhia that are partly under government control.