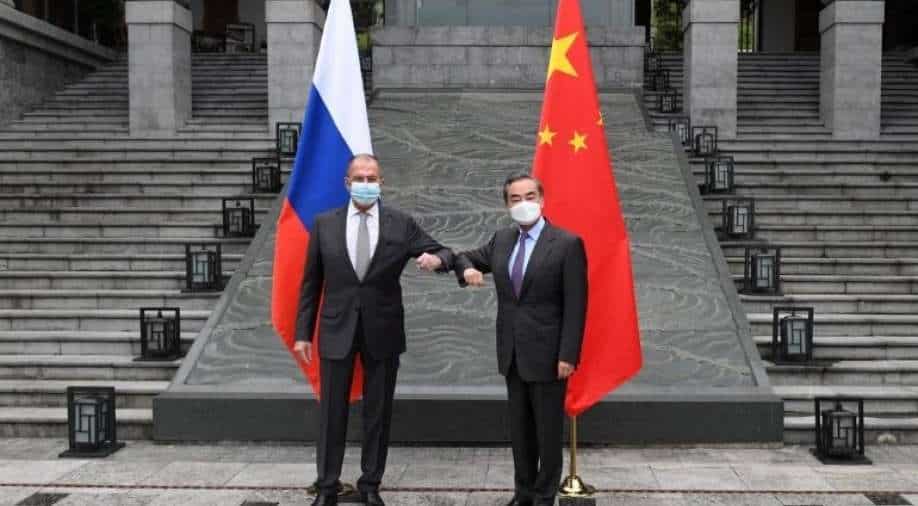 Lavrov's visit comes in the immediate backdrop of the first high-level strategic dialogue between US-China at Anchorage, Alaska, which was marked by angry rhetoric by both sides

Russian Foreign Minister Sergey Lavrov arrived in China on Monday for talks with his Chinese counterpart Wang Yi as the two countries stepped up efforts to cement their close ties to counter the Biden administration's plan to pursue a tough policy towards them on a host of issues including human rights violations.

#China and #Russia both agree that #US should take a hard look at the damage it has done to world peace and development, stop its bullying practice of ganging up on others and meddling in other countries' internal affairs. pic.twitter.com/Bcd6O8aVeE

During the meeting, both China and Russia agreed that ''the US should take a hard look at the damage it has done to world peace and development, stop its bullying practice of ganging up on others and meddling in other countries' internal affairs.''

The purposes and principles of the #UN Charter must be upheld. Real multilateralism & greater democracy in international relations should be pursued. pic.twitter.com/p1crjEQqeQ

Lavrov, 71, the longstanding top Russian diplomat, arrived in the Chinese city of Guilin in Guangxi province where he held talks with Wang on Monday and Tuesday, Chinese Foreign Ministry spokesperson Hua Chunying told a media briefing.

While announcing Lavrov's visit, Hua had denied China and Russia are ganging-up against the US and its allies.

Ahead of his arrival, Lavrov in interviews to various outlets of the Chinese official media said that the US and its partners were trying to dictate their own will on other countries and obstruct the establishment of the multipolar democratic world.

"Unfortunately, some of the Western countries, led by the United States, are trying to obstruct the establishment of the true multipolar democratic world, attempting to maintain at any cost their dominance in the global economy and international politics, and to obtrude upon everyone their will and demands," Lavrov was quoted as saying by Russia's state-run TASS news agency.

Lavrov said that it is unwise to use sanctions in a bid to punish Russia and China, referring to US sanctions on Chinese entities in Hong Kong and Washington's plans to impose sanctions against Russia.

"It is wrong to punish anyone on the present-day international arena and it is simply unwise to try to use this logic in respect of Russia and China," Lavrov said.

"The model of interaction between Russia and China is absolutely free from any ideological constraints. It is of intrinsic nature, not subject to any opportunistic factors nor against any third country," he stressed, state-run Xinhua news agency reported.

Lavrov's visit comes in the immediate backdrop of the first high-level strategic dialogue between US-China at Anchorage, Alaska, which was marked by angry rhetoric by both sides.

The Biden administration signalled to follow the tough China policy pursued by his predecessor, Donald Trump, which marked a new low in Beijing-Washington ties.

The last week's dialogue, the first after Biden took over as US President, was held between US Secretary of State Antony Blinken, National Security Advisor Jake Sullivan and senior Chinese diplomats Yang Jiechi and Wang.

Coinciding with the deterioration of China-US ties, Biden also signalled to pursue equally firm policy against Russia and its President Vladimir Putin by imposing sanctions over the poisoning of Russian Opposition leader Alexei Navalny, who is now in prison.