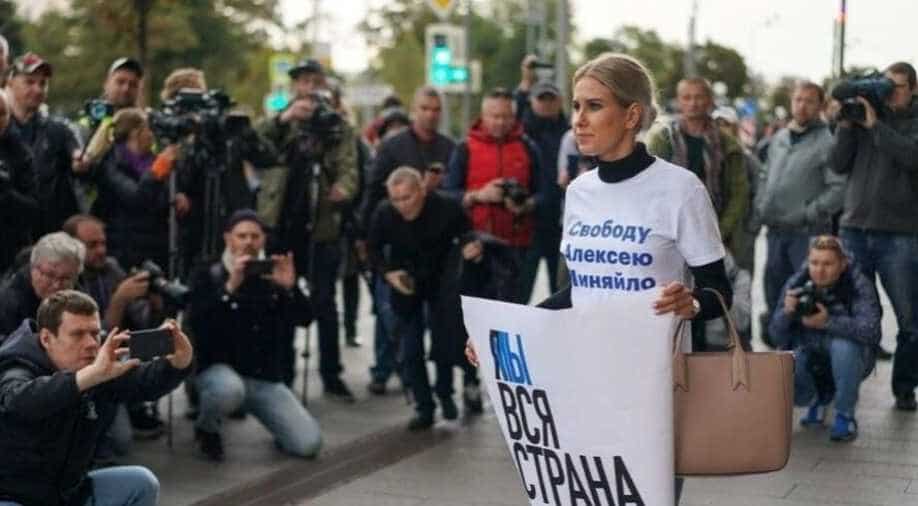 A campaign in support of jailed Russian demonstrators gained momentum Wednesday, with celebrities, priests and teachers calling for their release and more than 200 people protesting outside the presidential administration.

Dozens of stars with millions of followers on social media who usually steer clear of politics took to Instagram, saying Ustinov, who was sentenced to three and a half years in prison for violence against police, was simply an innocent bystander.

On Wednesday, the campaign grew bigger as scores of people including popular actors staged one-man pickets outside the offices of President Vladimir Putin's administration in central Moscow.

It is the only kind of demonstration Russians are permitted to hold without giving prior notice to the authorities.

One by one, the protesters held a placard calling for Ustinov's freedom while others waited their turn in a long line.

Some said all the jailed protesters should walk free, brandishing a placard "I am/We are the entire country."

"There's a feeling that something went wrong," popular actress Alexandra Bortich said at the protest.

"It's cool that people come out in support of Ustinov," he told AFP.

"Unfortunately, politicians did not learn anything from the history of our country."

Opposition leader Lyubov Sobol also appeared at the protest, sporting a T-shirt in support of one of the jailed activists.

Putin's spokesman Dmitry Peskov said the Kremlin would take the solidarity campaign into account and stressed that the actor's defence planned to appeal the verdict.

"Perhaps we should wait for the results of this appeal," he said.

Ustinov's lawyer, Dmitry Cheshkov, said a court date had yet to be set.

The celebrities have compared Ustinov's case with that of journalist Ivan Golunov, detained in June on trumped-up drug charges.

He was freed after an unprecedented solidarity campaign, which saw three major newspapers publish the same front page with the headline "I am/we are Ivan Golunov".

Over the summer, tens of thousands of people took part in protests demanding a fair vote after allies of Kremlin critic Alexei Navalny were barred from standing for the Moscow parliament in polls earlier this month.

More than a dozen people faced prison time on charges of mass unrest and attacking policemen after the protests.

Seven people were jailed, including a man who was sentenced to five years in prison over a controversial tweet.

A court on Wednesday returned the case of one protester, Aidar Gubaidulin, to the prosecutors and released him from custody.

In an unprecedented move, more than 70 Orthodox clerics have joined the campaign.

In an open letter published by the news site Pravmir which covers religious and other issues, the priests said the court rulings were apparently aimed at "intimidating" society.

The priests warned riot police and others against perjury, referencing the Bible.

"A false witness shall not be unpunished, and he that speaketh lies shall perish," they said.

In another open letter, nearly 800 teachers slammed "egregious lawlessness" and called for punishment for those who violated the law and jailed the protesters.

In a new twist, the ruling United Russia party joined the chorus of support, with Andrei Turchak, secretary of its general council, defending Ustinov.

The actors and comedians to have joined the celebrities' campaign include Oleg Menshikov, who starred in French director Regis Wargnier's film East/West.