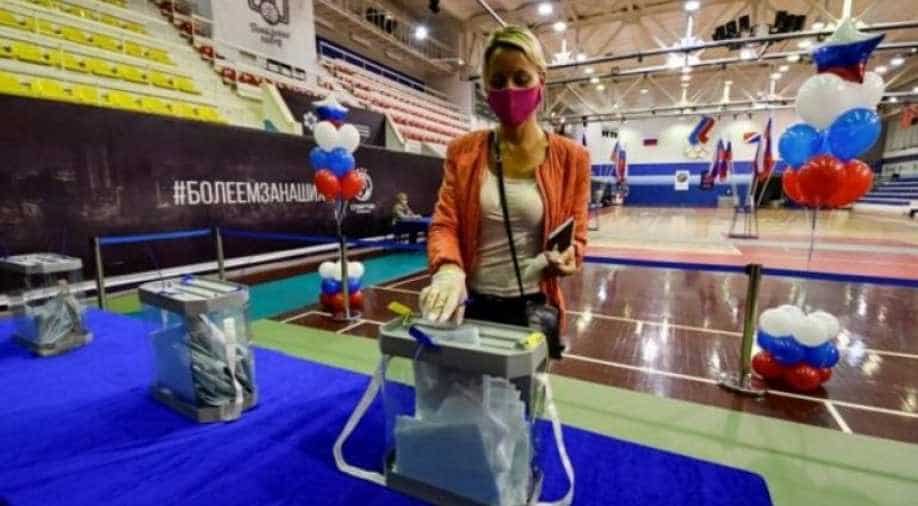 Masks and disinfectant gels have been made available to 110 million eligible voters across 10 time zones, and Russians in Vladivostok in the Far East cast ballots wearing masks as election officials distributed ballot papers in gloves.

Russia has begun voting on constitutional reforms that could allow President Vladimir Putin to serve another two terms in office.

The official vote is scheduled for 1 July, but authorities said they were opening polling stations a week early to stop overcrowding amid the pandemic.

Masks and disinfectant gels have been made available to 110 million eligible voters across 10 time zones, and Russians in Vladivostok in the Far East cast ballots wearing masks as election officials distributed ballot papers in gloves.

The Kremlin reluctantly postponed the vote scheduled for April 22 as Covid-19 infections increased and officials imposed restrictions to slow the pandemic.

Putin introduced the reforms to the 1993 Constitution in January this year, and they were hastily adopted by both Houses of Parliament and regional lawmakers.

Russia's coronavirus tally surged past 600,000 cases on Wednesday, the third-highest in the world, with thousands of new infections being reported every day, although authorities say the novel virus is on the wane.

All necessary safety precautions will be taken during the vote, authorities say.

If, as expected, the constitutional changes are approved, Putin would be able to run for two more back-to-back six-year terms after his current one expires in 2024.

The former KGB operative has been in power as either president or prime minister since 1999, and has not ruled out running again, but says he has not taken a final decision.

Critics believe he intends to cling to power like elderly Soviet leader Leonid Brezhnev who died in office. Others believe he is keeping his options open so as no to become a lame duck ahead of 2024 and may yet still hand over the reins to a handpicked but currently unknown successor.

"Since the president did not find a successor, he appointed himself," said Andrei Kolesnikov, a senior fellow at Carnegie's Moscow Center think tank.

Supported by state media and facing no immediate threat from a divided opposition, the vote, which is on a large bundle of constitutional changes, is expected to go Putin's way despite rising unemployment, a coronavirus-battered economy and no real prospect of an economic upswing anytime soon.

He has insisted that Russians vote on the changes even though a referendum is not legally required, arguing that a plebiscite would give them legitimacy.