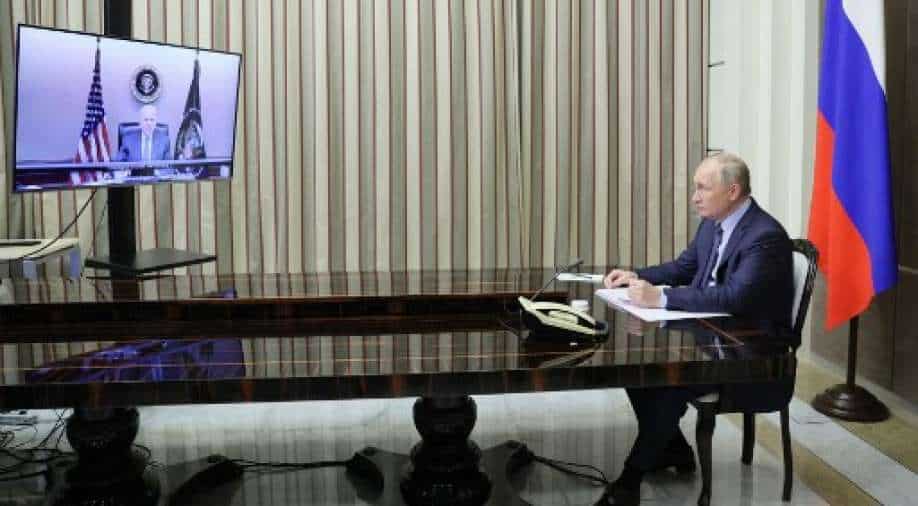 President Putin attends a meeting with US President Biden via a video call from Sochi Photograph:( AFP )

Ahead of the talks, Kremlin had declared that it did not expect any breakthrough during Putin's video summit with US President Biden.

US President Biden's virtual summit with Russian President Putin over a video link lasted for two hours on Tuesday.

As the talks began, President Biden greeted the Russian president saying, "hopefully next time we meet in-person". "The last time we could not meet during G20," Biden added.

The US president spoke to Putin from the White House situation room as the Russian president connected from the Black Sea resort of Sochi. The meeting was held via a secure video link and was held privately.

The summit took place amid tensions in Ukraine with Russian troops reportedly amassed at the border.

The White House said President Biden will call US allies including Britain, France, Germany and Italy after talks with Putin. The White House added that the two leaders agreed to stay in close touch amid reports of Russian troop build-up along Ukraine's border.

Ahead of the talks, Kremlin had declared that it did not expect any breakthrough. The two leaders had earlier met in Geneva in a first in-person summit since Biden became the US president.

President Putin has insisted NATO should guarantee it will not expand east to the Russian border even as Ukraine has repeatedly said over the past month that Russia has been deploying heavy armour along the border.

President Biden had earlier said that his administration is putting together a "comprehensive and meaningful set of initiatives" to ensure Putin's Russia does not "go ahead and do what people are worried he may do" referring to Russia's plan to invade Ukraine.

Putin has however denied his forces are set to attack Ukraine asserting that Russian troops can move about freely inside their territory as they wished.

However, western governments including US secretary of state Antony Blinken has spoken out against large scale troop movements while sending warnings to Kremlin.