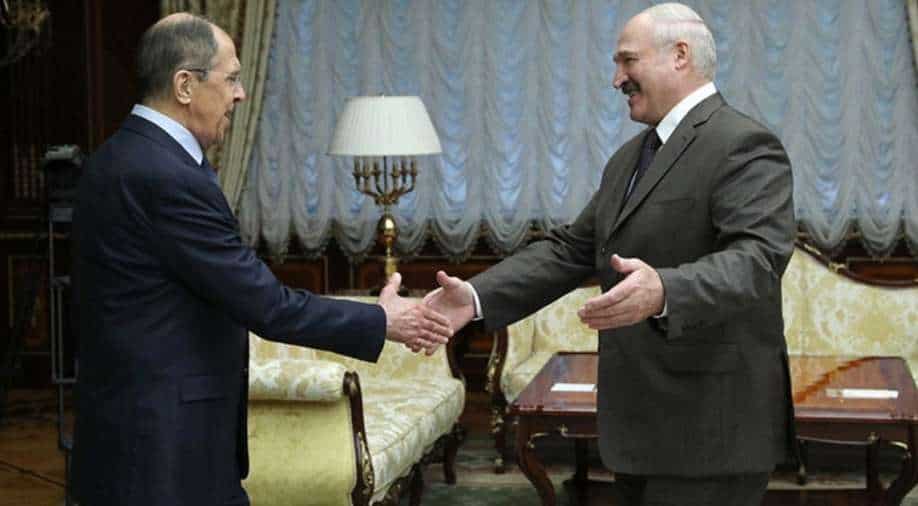 It comes as Lavrov met strongman leader Lukashenko who has faced months of protests over his disputed re-election.

Lavrov sent regards from President Vladimir Putin who bestowed a $1.5 billion loan on Belarus earlier in September in a gesture of support for Lukashenko. Russia is a traditional ally of Belarus.

Sergei Lavrov held talks with Lukashenko and other top officials in the capital Minsk, in the latest show of Russia's support for authorities in its ex-Soviet neighbour.

Thousands of protesters demanding Lukashenko's resignation have taken to the streets of Minsk every weekend since an August 9 election that saw the 66-year-old claim a sixth term in office.

Protesters believe political novice Svetlana Tikhanovskaya, 38, who took her jailed husband's place in the presidential race, was the true winner.

Moscow has continued to back Lukashenko since the protests erupted, with several meetings between senior officials from both sides in recent months.

Speaking at a press conference with his Belarusian counterpart Vladimir Makei, Lavrov accused the United States and several European countries of "gross interference" in the domestic affairs of Belarus.

"The wise Belarusian people are able to sort themselves out without any outside prompting and intrusive offers of unsolicited mediation," Lavrov said.

Lukashenko has accused Western countries of orchestrating the demonstrations and conspiring to have him removed after 26 years in power.

Lavrov said the West is "using dirty methods of so-called colour revolutions, including manipulating public opinion, supporting forces that are openly anti-government and promoting their radicalisation".

Several Western leaders have refused to recognise the results of the election and voiced support for Tikhanovskaya, who fled to EU member Lithuania shortly after the vote.

The European Union has slapped sanctions on Lukashenko and a number of his allies citing election rigging and a violent police crackdown on demonstrators.

Belarus police detained thousands of protesters in the first days of the demonstrations, with many reporting torture and abuse in custody.

They have continued to regularly arrest demonstrators and opposition figures, and several people have died during the protests.