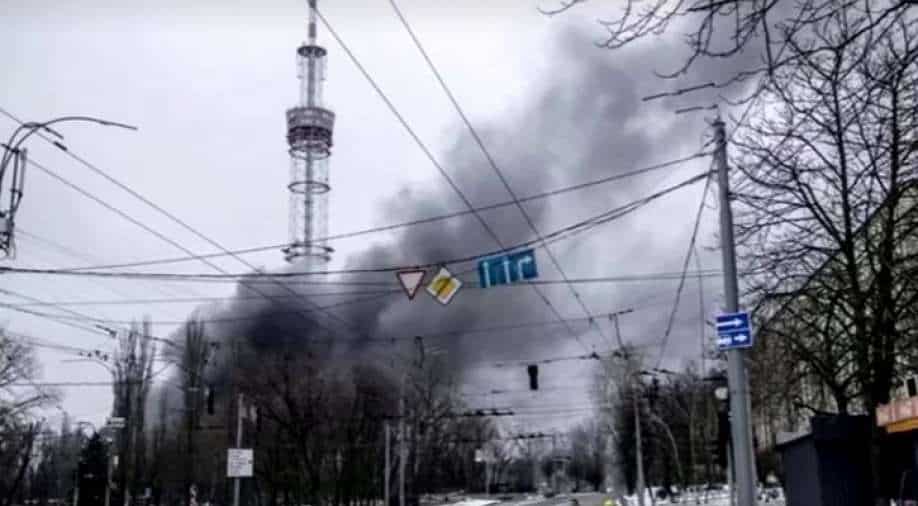 US secretary of state Anthony Blinken had said earlier that civilian cars, buses and ambulances were being targeted by Russian forces

After Russia warned residents in Kyiv to stay away from intelligence infrastructure, reports said the main television tower was hit amid escalating attacks on Ukraine's capital.

Reports said at least five people were killed after the Russian strike on the TV tower. The Ukrainian foreign ministry said the tower was located near a memorial site that commemorates the victims of Babyn Yar, a holocaust memorial.

Also Read in Pics: Facts about Ukraine that have long been disputed by great empires

"Russian troops fired on the TV tower, near the Memorial complex Babyn Yar," Ukraine's foreign ministry said, adding,"Russian criminals do not stop at anything in their barbarism."

US secretary of state Anthony Blinken had said earlier that civilian cars, buses and ambulances were being targeted by Russian forces including schools and hospitals as he suggested that Putin's Russia should be stripped off UN rights council membership.

Watch: US and Europe sanction Putin but where are his assets?

"If Russian President Vladimir Putin achieves his goal of ousting the government in Kyiv, the humanitarian and rights crises in Ukraine will only get worse", Blinken warned as Russia continued its offensive against Ukraine for the sixth day on Tuesday.

UK PM Johnson said Putin has made a "miscalculation" based on evidence on how Ukrainians had responded.

"World has been united to praise the valour of the Ukraine people led by President Zelensky," PM Johnson said.