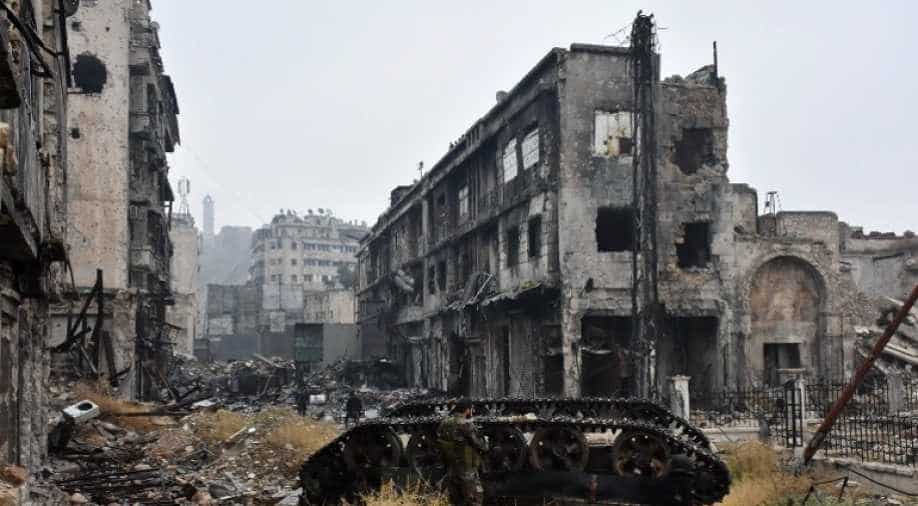 Officials of several rebel groups said the deal would allow both civilians and fighters to leave for opposition-held territory to the west of the city. Photograph:( AFP )

Civilians and rebel fighters were to start evacuating from Syria's Aleppo Wednesday under a deal that would end years of opposition resistance in the city.

The evacuations which were expected to begin at 0300 GMT, according to the Syrian Observatory for Human Rights monitor, had yet to commence more than half an hour after the time had passed, an AFP correspondent in the city said.

About 20 green government buses were gathered at the edges of the divided Salaheddin district. Some entered briefly Tuesday night but returned empty and parked on the outskirts again, the journalist said.

Rebel officials, Russia and Turkey confirmed the agreement which, if implemented, would mark a major victory for President Bashar al-Assad over opposition forces who rose up against him in 2011.

The agreement came amid mounting global outrage over reports of atrocities, including dozens of summary executions, as forces loyal to Assad closed in on the last pocket of rebel territory in Aleppo.

Officials from several rebel groups told AFP there was a deal to allow civilians and fighters to leave Aleppo for opposition-held territory to the west of the city.

"An agreement has been reached," said Yasser al-Youssef from the political office of the key Nureddin al-Zinki rebel group, adding it had been "sponsored" by Russia and Turkey.

"The first stage will be the evacuation of civilians and wounded, within hours, and afterwards fighters will leave with their light weapons."

US calls for observers
Washington said it had not been consulted but would welcome any arrangement that brought safety to the people of Aleppo.

"It matters a lot less to us who or how a ceasefire is arranged or reached, and much more that one is arranged and reached," state department spokesman John Kirby said.

As the UN Security Council met in an emergency session to discuss Aleppo, Russian envoy Vitaly Churkin confirmed there was an agreement for the rebels to leave the city.

US ambassador to the UN Samantha Power said Washington wanted international observers to oversee the evacuation, raising concern for "people who wish to leave but who, justifiably, fear that if they try they will be shot in the street or carted off to one of Assad's gulags."

Turkey's foreign ministry said under the agreement civilians would first evacuate, followed by a withdrawal of rebel groups.

Deputy prime minister Mehmet Simsek said on Twitter that Turkey would "set up a tent city to accommodate up to 80,000 Syrian refugees fleeing Aleppo".

An AFP correspondent in west Aleppo said there had been no sounds of fighting or bombardment since around 3:00 pm (1300 GMT) Tuesday and the Observatory also said it was quiet.

The United Nations and aid agencies had been pleading for an agreement to allow for the evacuation of thousands of civilians trapped in rebel territory.

After weeks of heavy fighting, forces loyal to Assad were on the verge of taking all of the city, dealing the biggest blow to Syria's rebellion in more than five years of civil war.

Scenes of carnage
The United Nations said it had received credible reports of at least 82 civilians, including 11 women and 13 children, being executed by pro-government forces in Aleppo in recent days.

In Geneva, UN rights office spokesman Rupert Colville said pro-government fighters had in some cases entered homes and killed those inside, and in others "caught and killed on the spot" fleeing civilians.

The UN was "filled with the deepest foreboding for those who remain in this last hellish corner of opposition-held eastern Aleppo," he said.

Witnesses in Aleppo described scenes of carnage in rebel areas, with bodies lying amid the rubble of city streets, as desperate residents sat on pavements with nowhere to shelter.

Syria's army has taken more than 90 per cent of the territory once held by rebels in east Aleppo, after launching an all-out offensive last month to seize control of the entire city.

Aleppo, a cultural and economic hub in northern Syria second only to Damascus in importance, had been split between a rebel-controlled east and government-held west since 2012.

'Last chance'
It was unclear how many civilians remained in rebel territory, after an estimated 130,000 fled to other parts of Aleppo during the government advance.

Jan Egeland, head of the UN-backed humanitarian taskforce for Syria, told AFP that thousands of civilians were in need of evacuation and safe passage, including hundreds of wounded.

"We need a pause in the fighting but we also need to get the people inside to help organise an evacuation," he said.

The International Committee of the Red Cross said there was only a "last chance to save lives" in Aleppo.

The government assault has been backed by heavy artillery fire and air strikes, with at least 463 civilians, including 62 children, killed in east Aleppo since mid-November, according to the Observatory.

Another 130 people including 40 children have been killed in western districts by rebel rocket fire, the monitoring group says.

More than 310,000 people have been killed since the Syrian conflict began in March 2011, and over half the population has been displaced, with millions becoming refugees.