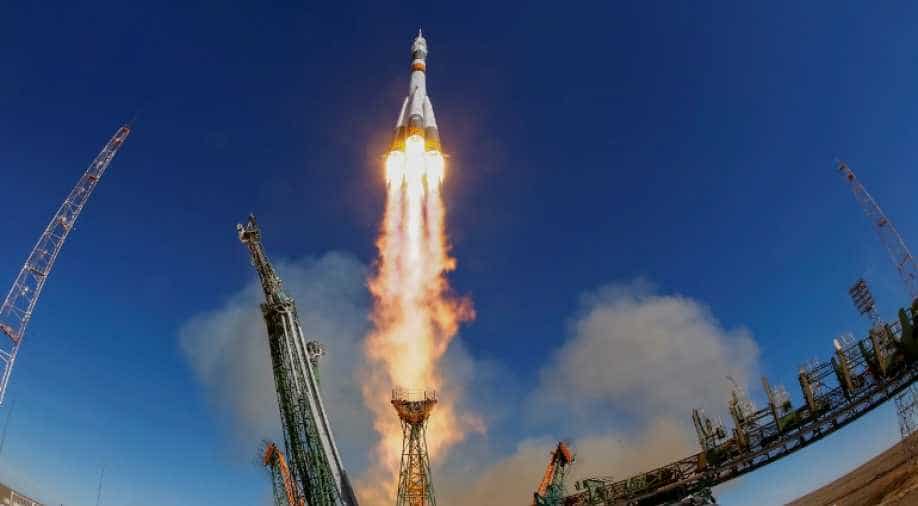 The Soyuz MS-10 spacecraft carrying the crew of astronaut Nick Hague of the US and cosmonaut Alexey Ovchinin of Russia blasts off to the International Space Station (ISS) from the launchpad at the Baikonur Cosmodrome, Kazakhstan. Photograph:( Reuters )

Russia, the only country able to ferry astronauts to the orbiting science lab, suspended all launches after a rocket failed on October 11 just minutes after blast-off -- the first such incident in the history of post-Soviet space travel.

Russia hopes to launch three crew for the International Space Station on December 3, the first manned blast-off since an accident this month, the Roscosmos space agency said Wednesday.

Russia, the only country able to ferry astronauts to the orbiting science lab, suspended all launches after a rocket failed on October 11 just minutes after blast-off -- the first such incident in the history of post-Soviet space travel.

On the rocket destined for the ISS will be Russian cosmonaut Oleg Kononenko, Canadian astronaut David Saint-Jacques, and NASA astronaut Anne McClain.

The trio had originally been scheduled to blast off on December 20, but had their trip brought forward after the failed October 11 launch with Russia's Aleksey Ovchinin and NASA's Nick Hague on board.

Ovchinin and Hague returned safely back to Earth in their capsule, and are likely get their chance to go to the space station in the spring, Roscosmos chief Dmitry Rogozin has said.

Krikalyov said the astronauts currently on the ISS -- Alexander Gerst of the European Space Agency, NASA's Serena Aunon-Chancellor, and Sergey Prokopyev of Roscosmos -- are expected to back on Earth "around December 20."

They had initially been scheduled to land on December 13 after their stint on the ISS, a joint project of the space agencies of America, Europe, Russia, Japan and Canada.

Meanwhile, an unmanned Progress cargo ship will blast off to the ISS on November 16 after its launch was postponed from October 30 due to the accident investigation, Krikalyov said.

In the first official report on the cause of the October 11 accident, Roscosmos said a sensor that indicated the separation of the first two stages of the rocket malfunctioned.

The Soyuz rocket used to launch astronauts has three stages, or segments. The first stage with four boosters is used to blast the rocket into the sky, before falling back to Earth, as the second and third stages continue the journey.

"The reason found by the commission (investigating the accident) was the abnormal operation of a sensor that signals the separation of the first and second stages," Krikalyov said at a space industry event in Moscow.

The malfunction led to one of the four boosters on the first stage failing to detach correctly and colliding with a fuel tank of the second stage, which exploded.

Roscosmos is due to hold a press conference Thursday to further detail the findings of the accident probe.