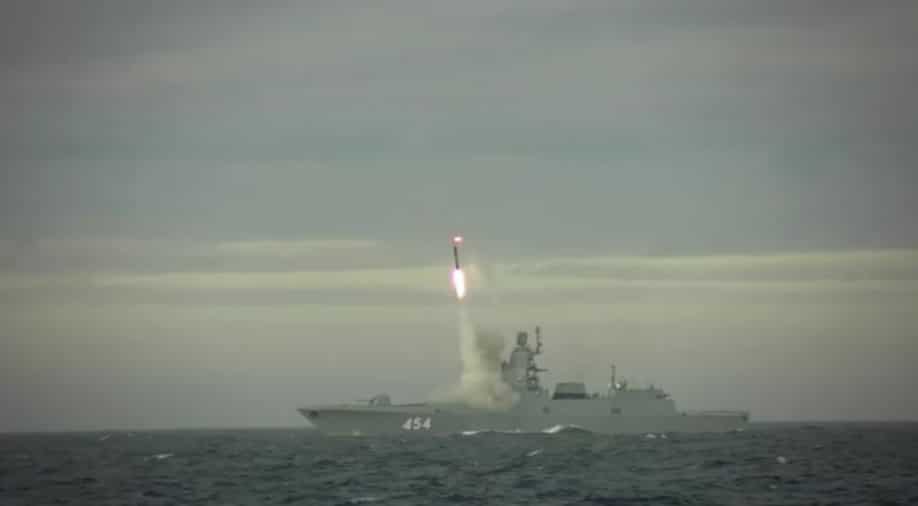 In this picture, Russia's Zircon hypersonic cruise missile can be seen above the Barents Sea Photograph:( Reuters )

Described as part of a new generation of unrivalled arms systems, Zircon is intended to arm Russian cruisers, frigates, and submarines

The Russian defence ministry said on Saturday that Moscow has successfully test-fired a hypersonic Zircon cruise missile over a distance of about 1,000 km (625 miles).

The missile, which hit a practice target in the White Sea, was fired from the Barents Sea according to a video released by the ministry.

Described as part of a new generation of unrivalled arms systems, Zircon is intended to arm Russian cruisers, frigates, and submarines.

The hypersonic missile can travel at nine times the speed of sound and Putin has emphasised that its deployment will significantly boost the capability of Russia’s military.

Russia has increased its development of hypersonic missiles after its military has suffered heavy losses of men and equipment during its three-month invasion of Ukraine, which it calls a "special operation."

This is not the first time Russia has tested the Zircon missile. Admiral Gorshkov's frigate in the White Sea had launched the Zircon cruise missile last year.

The Kremlin, which has made modernising the country’s arsenals a top priority amid the tensions with the West, test-launched a new nuclear-capable intercontinental missile, the Sarmat last month which is capable of carrying 10 or more warheads and striking the United States.

Russia has continued to stage high-profile weapons tests to remind the world of its prowess in missile technology ever since it annexed Ukraine’s Crimean Peninsula in 2014.