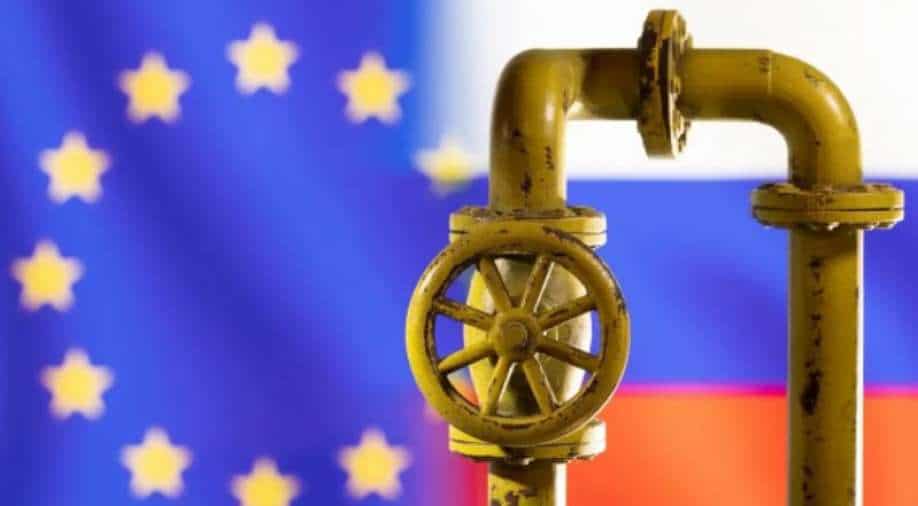 A model of the natural gas pipeline is seen in front of displayed word EU and Russia flag colours in this illustration. Photograph:( Reuters )

Reports claim gas flow to Europe fell on Wednesday as Ukraine stopped use of transit route due to what it called Russian interference.

Ukraine said Russia had stopped gas supply through a key hub amid fears of an energy crisis in Europe.

Kremlin however asserted that it is committed to its "contractual obligations" even as it said it was impossible to transport gas through the crossing point of Sokhranivka and the border compressor station Novopskov since it was located in "occupied territories".

Reports claim gas flow to Europe fell on Wednesday as Ukraine stopped use of transit route due to what it called Russian interference.

The move has fuelled fears of gas prices skyrocketing even as Germany said it was "closely" monitoring the situation. Ukraine pipeliner operator GTSOU informed that Gazprom had "turned off the tap" as reports claimed no gas was flowing through Sokhranivka.

Watch: Putin unlikely to use nuclear weapons unless he feels an 'existential threat'

Germany is likely to face the brunt of the gas shortage. The pipeline runs through the Czech Republic and Slovakia and into Germany via Waidhaus in Bavaria. Germany depends overwhelmingly on Russian gas accounting for 55 per cent of its imports.

The German government claimed it has enough gas stocks with significantly higher than in the spring of last year.