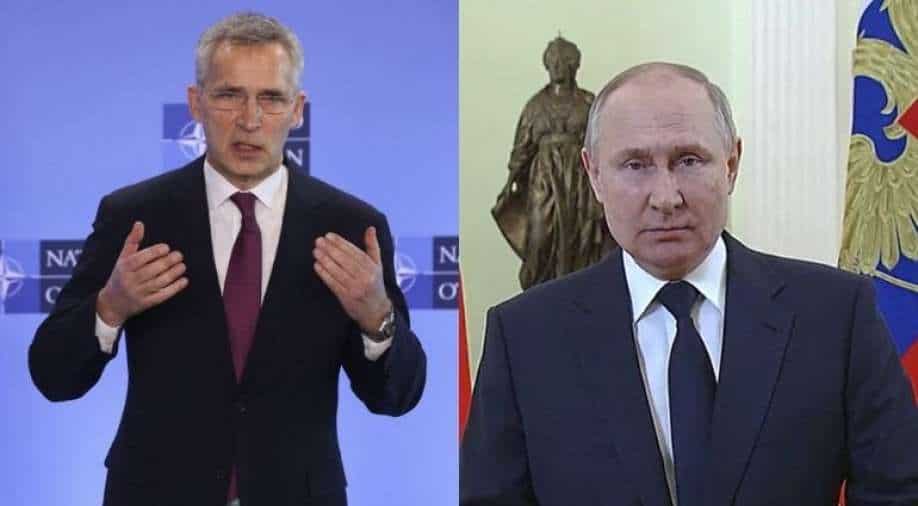 In this combination of images, NATO Secretary-General Jens Stoltenberg can be seen along with Russian President Vladimir Putin. Photograph:( Agencies )

Stoltenberg said that although the Ukrainian people were resisting the Russian invasion with courage, the coming days are likely to bring even greater hardship

NATO Secretary-General Jens Stoltenberg has said that Russia can plan chemical weapons operations under the fabrication of lies about biological weapons laboratories.

"In recent days, we have heard absurd claims about chemical and biological weapons laboratories," Stoltenberg said in an interview with German newspaper Welt am Sonntag.

"Now that these false claims have been made, we must remain vigilant because it is possible that Russia itself could plan chemical weapons operations under this fabrication of lies. That would be a war crime," Stoltenberg was quoted as saying.

He added that although the Ukrainian people were resisting the Russian invasion with courage, the coming days are likely to bring even greater hardship.

"We have a responsibility to prevent this conflict from escalating beyond Ukraine's borders to becoming a full-fledged war between Russia and NATO," the NATO chief said.

Stoltenberg said that the training of tens of thousands of Ukrainian troops by NATO member states in recent years, as well as the supply of military equipment, had proved "extremely important (for Ukraine's forces) in the fight against invading Russian forces".

But he added: "The most important thing is that President (Vladimir) Putin should end this senseless war," he said.

"Withdraw all its forces and engage in good faith in diplomatic political efforts to find a political solution," said Stoltenberg.

Talks aimed at reaching a cease-fire again failed Saturday, and the US announced plans to provide another $200 million to Ukraine for weapons.

Ukrainian President Volodymyr Zelensky accused Russia of trying to break his country apart, as well as starting “a new stage of terror” with the alleged detention of a mayor from a city west of Mariupol.

“Ukraine will stand this test. We need time and strength to break the war machine that has come to our land,” Zelensky said during his nightly address to the nation Saturday.

Zelensky said Saturday that Russians were using blackmail and bribery in an attempt to force local officials to form a “pseudo-republic” in the southern Kherson region, much like those in Donetsk and Luhansk, two eastern regions where pro-Russian separatists began fighting Ukrainian forces in 2014.

He again deplored NATO’s refusal to declare a no-fly zone over Ukraine and said Ukraine has sought ways to procure air defense assets, though he didn’t elaborate.