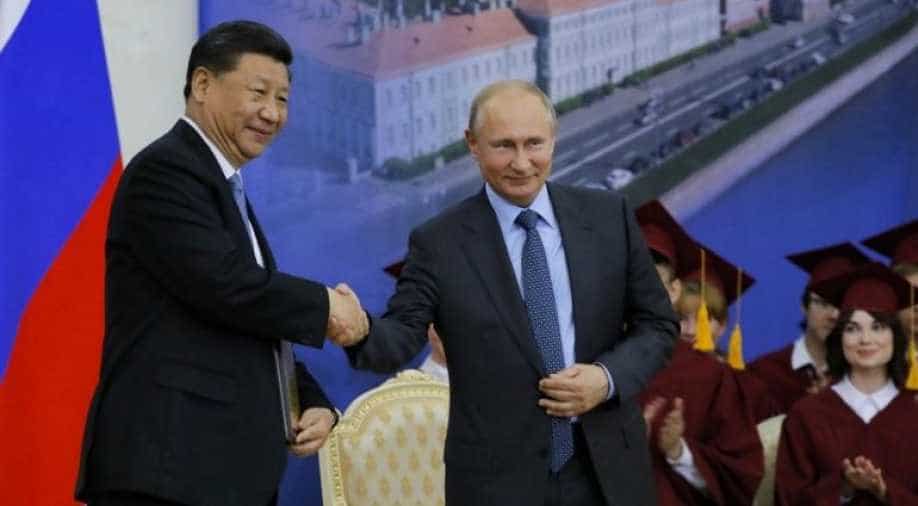 Xi arrived in Moscow on Wednesday for a three-day visit with Vladimir Putin and described the Russian leader as his "best friend" during a cosy meeting at the Kremlin.

Chinese President Xi Jinping appears Friday as a guest of honour at Russia's showcase economic forum, as the two neighbours present a united front in the face of shared troubles with the US.

Xi arrived in Moscow on Wednesday for a three-day visit with Vladimir Putin and described the Russian leader as his "best friend" during a cosy meeting at the Kremlin.

To end the trip, Xi and his host will appear at a plenary session of the annual Saint Petersburg International Economic Forum, which Moscow hopes will woo foreign investors despite an uncertain business climate.

Xi is set to present China's ideas on sustainable development and multilateral cooperation, Beijing said ahead of his appearance.

The 2019 forum "will illustrate very clearly just how bi-polar the world has become," said Chris Weafer, a senior partner at the Macro Advisory consulting firm.

"In the same week that President Trump will be having tea with the Queen in London, President Putin will be hosting President Xi in Saint Petersburg."

The trip comes five years after Moscow's annexation of Ukraine's Crimea peninsula led to a serious rift with the West and a move towards Russia's neighbour to the east.

China meanwhile is locked in a trade war with the United States that has seen Washington impose sweeping duties and move to blacklist companies like tech giant Huawei.

Moscow and Beijing's economic ties have grown in recent years, though they remain heavily weighted in favour of China, which dwarfs Russia in economic and demographic terms.

Xi's visit has already seen the signing of dozens of commercial contracts in e-commerce, telecoms, gas and other areas.

Other deals have been signed at the forum, including one on Friday between Russian and Chinese shipping companies to work together to develop Arctic sea routes.

While this is the Chinese leader's first appearance at the economic forum, where he heads a 1,000-strong delegation, he and Putin have met regularly in recent years.

The partnership is yielding increasing trade, which grew by 25 per cent in 2018 to hit a record $108 billion, he said.

At a panel Friday on Russia-China business ties, Russian tycoon Viktor Vekselberg, a target of US sanctions, called for the two countries to carry out more trade in their national currencies, bypassing the US dollar.

But despite political tensions and repeated rounds of sanctions over Moscow's actions in Ukraine, the European Union remains by far the biggest foreign investor in Russia -- well ahead of China and the US.

"China is taking time to ramp up investments in Russia," said Charles Robertson, chief economist at Renaissance Capital. "It wants to feel secure about the long term, it doesn't want to rush into it."

He predicted China would make big investments over the next three to five years, possibly even sooner, as Russia plays an important role in projects along Beijing's New Silk Road.

The first day of the forum on Thursday saw Putin make a pitch for increased foreign investment as Russia looks to revive an economy hit by Western sanctions over Ukraine and the drop in oil prices.

After emerging from recession in 2017, the Russian economy ticked up by only 0.5 percent in the first quarter of this year.

Putin, whose approval ratings have dropped to record lows, has vowed to boost growth through a series of "national projects" -- ranging from healthcare to infrastructure -- that will cost Russia $388 billion.

But foreign investors, already wary of Russia' volatile business climate, were further spooked by the arrest on fraud charges in February of US businessman Michael Calvey, the founder of one of the oldest private equity firms focusing on Russia.

He denies the charges, saying the arrest was the result of a shareholder dispute.

Speculation swirled at the forum over whether Calvey, who is under house arrest, would attend. On Friday his lawyer said authorities had not yet replied to a request from the businessman to travel to Saint Petersburg.