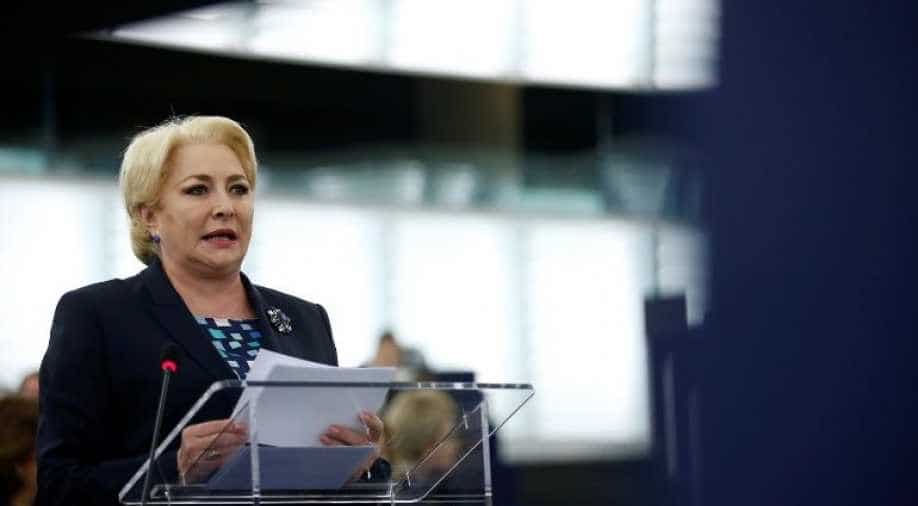 Romanian Prime Minister Viorica Dancila delivers a speech during a debate at the European Parliament in Strasbourg, France. Photograph:( Reuters )

Romania's prime minister-designate on Thursday unveiled a minority government line-up with only a slim chance of winning parliamentary approval.

"We are in a moment in which we need a government to put Romania on the right track", Orban told a press conference flanked by his 17 cabinet members, all but two from his party.

The new cabinet needs the approval of parliament, which is a challenge, given that PNL holds only 96 of the 465 seats, leaving it well short of the 233 majority threshold after talks with several other parties failed.

Orban, 56, a former transport minister, wants a confidence vote to take place next week, while the PSD, which has 201 seats and says it will not back the new government -- is trying to delay it until early November.

If he does survive, his government will likely be a transitional one until late 2020 when the next parliamentary elections are scheduled.

The new ministers are all from PNL except for four-star general Nicolae Ciuca who takes on defence and career diplomat Bogdan Aurescu, nominated as foreign minister.

Among its priorities, the government aims to keep the annual budget deficit under three per cent of GDP, the EU limit, and to reverse "harmful" judicial reforms introduced by the PSD.

Since taking power in late 2016, the PSD government faced massive protests and criticism from Brussels over the reforms seen as helping politicians to escape corruption sentences.

The liberals also intend to nominate a new European Commissioner after social democrat Rovana Plumb was rejected by the European Parliament.

The political crisis in Romania comes one month before the first round of presidential elections, scheduled for November 10.

Incumbent Iohannis, himself a liberal, seeks a second term with the support of the PNL and is a clear favourite.