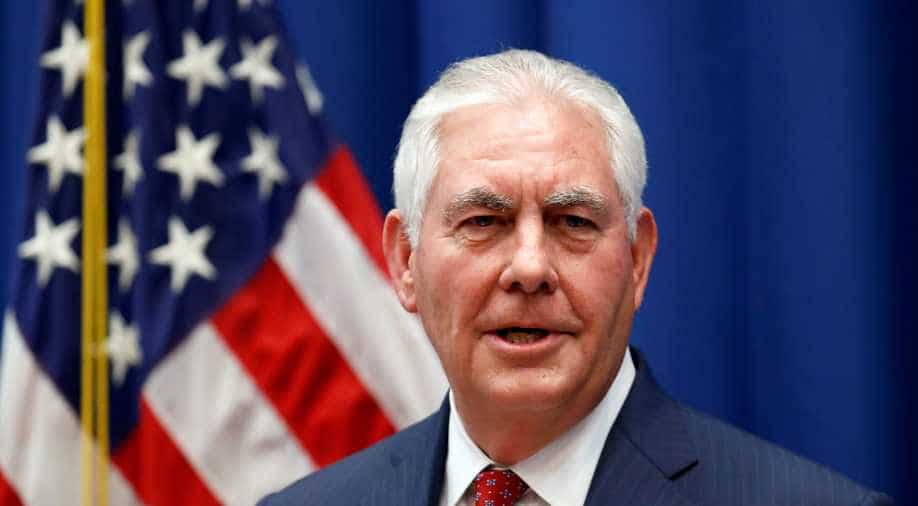 Tillerson's spokeswoman said he would visit Naypyidaw on November 15. Photograph:(Reuters)
Follow Us

Pressure has mounted for a tougher US response to the Rohingya crisis ahead of President Donald Trump?s maiden visit to Asia next month. ||Myanmar's de facto leader, Aung San Suu Kyi today visited areas hit by conflict in the western state of Rakhine for the first time.

US secretary of state Rex Tillerson will visit Myanmar next week, the State Department today to address the Rohingya crisis.

Tillerson's spokeswoman said he would visit Naypyidaw on November 15 for talks on "humanitarian crisis in Rakhine State and US support for Burma's democratic transition."

Tillerson had spoken to Myanmar's army chief last week and had expressed concern over reported atrocities against Rohingyas in Rakhine state.

Tillerson urged the army chief, senior general Min Aung Hlaing, to support the Myanmar government in ending the violence and allowing the safe return of ethnic Rohingya who has fled the area.

During his phone call with Min Aung Hlaing, Tillerson had urged the Myanmar military to facilitate humanitarian aid for displaced people, allow media access and cooperate with a U.N. investigation into allegations of human rights abuses

There were reports of the US State Department considering formally declaring the crackdown on Rohingyas as "ethnic cleansing", a move which was earlier made by the UN.

Pressure has mounted for a tougher US response to the Rohingya crisis ahead of President Donald Trump’s maiden visit to Asia next month when he will attend a summit of Southeast Asian countries, including Myanmar, in Manila.

Spokesman Zaw Htay said that she was visiting the troubled border district of Maungdaw, where more than 600,000 members of the stateless Rohingya group have crossed into Bangladesh since August 25th.