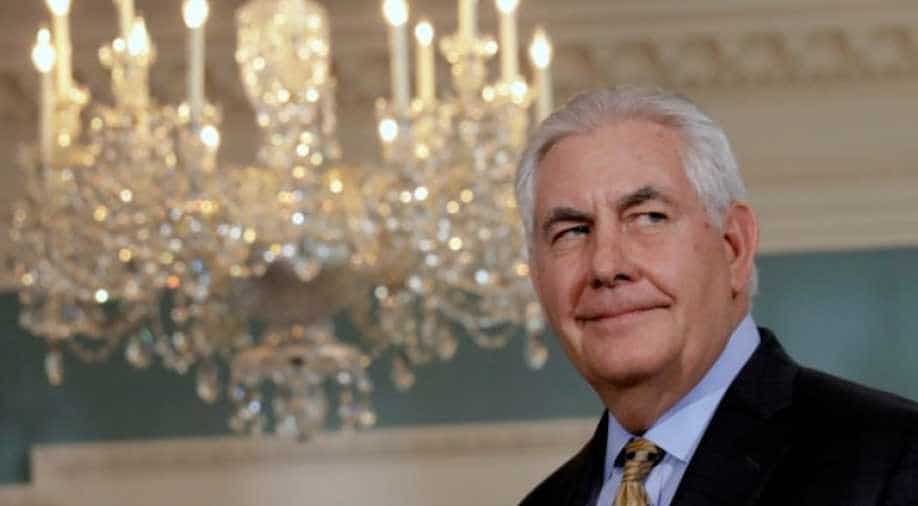 Secretary of State Rex Tillerson visited the new $1 billion US embassy in London on Monday, just days after his boss Donald Trump criticised the move to new diplomatic premises as part of a bad deal agreed by the administration of Barack Obama.

Trump earlier this month cancelled a trip to London to open the new embassy, saying he did not want to endorse a bad deal agreed by the Obama administration to sell the old one for "peanuts".

Tillerson was greeted by US Ambassador Woody Johnson as workmen finished planting shrubs in the grounds of the new embassy. America`s top diplomat then met some of the marines who are stationed at the embassy.

"The embassy actually, is gonna really work," US Ambassador Johnson said ahead of Tillerson`s arrival.

Asked when there would be a ribbon cutting ceremony, Ambassador Johnson said: "At some point we`re going to do it, but there`s no urgency to that. We`ll do it when the time is right."

The decision to move the US Embassy from its current Grosvenor Square location in the exclusive Mayfair area of London and to a site on the south bank of the Thames was agreed in 2008 under the presidency of George W. Bush.

The American flag was this month removed from Grosvenor Square where the US embassy has been based since 1938 with the area known as "Little America" during World War Two, when the square also housed the military headquarters of General Dwight D. Eisenhower.

The new embassy is a veritable fortress set back at least 100 feet (30 metres) from surrounding buildings - mostly newly-erected high-rise residential blocks - and incorporating living quarters for US Marines permanently stationed inside.

The $1 billion construction was funded by the sale of other properties in London.