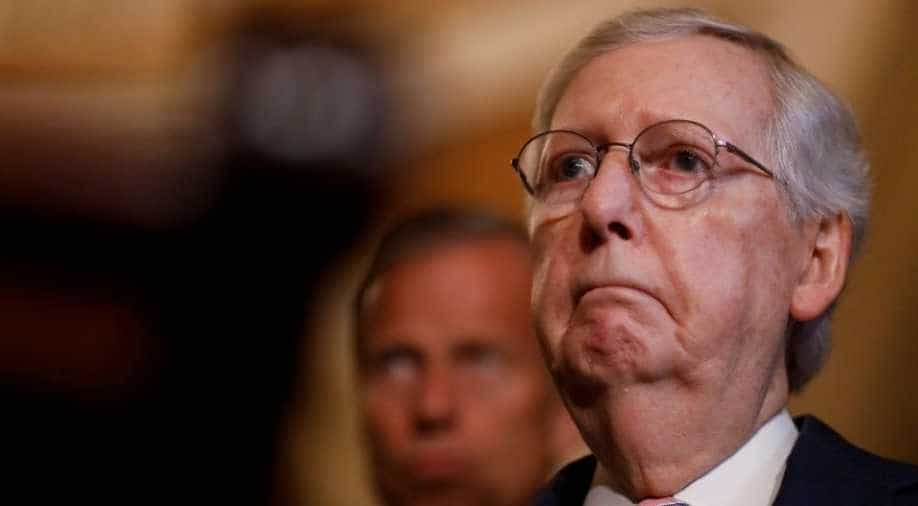 Twitter locked the 'Team Mitch' account after it posted a video of protesters outside the Senate majority leader's home in Kentucky shouting that he should die.

Twitter locked the "Team Mitch" account after it posted a video of protesters outside the Senate majority leader's home in Kentucky shouting that he should die.

The demonstration came after "Team Mitch" shared a picture over the weekend originally posted on Instagram of young McConnell supporters groping and choking a life-size cardboard cutout of New York Democrat Alexandria Ocasio-Cortez.

The conservative backlash over McConnell's frozen account was swift.

"Twitter's hostile actions toward Leader McConnell's campaign are outrageous, and we will not tolerate it," National Republican Senatorial Committee spokesman Jesse Hunt said in a statement.

He said his group "will suspend all spending with Twitter until further notice. We will not spend our resources on a platform that silences conservatives."

The Republican Party "and @TeamTrump stand with the @Team_Mitch and the @NRSC," tweeted Republican National Committee chief of staff Richard Walters.

"Any future ad $ either organization was planning to spend with @Twitter has been halted until they address this disgusting bias," he wrote.

The weekend photo posted by the Team Mitch account led Ocasio-Cortez herself to fire back.

"Hey @senatemajldr - these young men look like they work for you," she tweeted Monday.

"Just wanted to clarify: are you paying for young men to practice groping & choking members of Congress w/ your payroll, or is this just the standard culture of #TeamMitch? Thanks."

The original Instagram photo was taken down and the user who posted it apologized - but McConnell's campaign manager, Kevin Golden, was unapologetic.

He complained that "the far-left and the media" were working hard "to demonize, stereotype, and publicly castigate every young person who dares to get involved with Republican politics," noting that the young men in the photo who wore Team Mitch t-shirts were high school supporters.

Golden then condemned "aggressive, suggestive, or demeaning act toward life-sized cardboard cutouts of any gender."