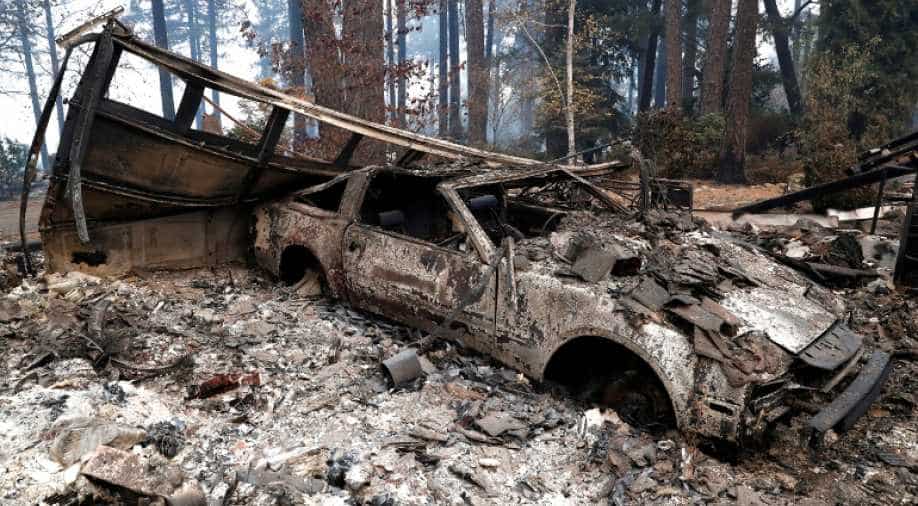 The death toll of the fire has been gradually rising, with two more names added to the list on Wednesday to bring the total to 83.

The first significant rain in months in northern California helped firefighters battle the deadliest wildfire in the state's history on Wednesday, but raised the risks of flash flooding that could hinder teams searching for human remains.

Between 4-6 inches (15 cm) of rain was expected to fall through the weekend in areas around the town of Paradise, the community of nearly 27,000 people 175 miles (280 kilometers) northeast of San Francisco that was largely incinerated by the Camp Fire. The blaze killed at least 83 people, and 563 are still unaccounted for, Butte County Sheriff Kory Honea told a press briefing on Wednesday.

"The rain is a concern for us and there is the potential for mudflows," Honea said, adding that he would pull searchers out of areas if they faced any risk of being caught in mudslides.

The rain added to the misery of evacuees camped out in a Walmart parking lot in nearby Chico, where local residents donated freight pallets and tarps to help evacuees shelter from overnight temperatures just above freezing.

"I'll get a pallet and get my tent up off the ground," said Mitchell Manley, who evacuated from the village of Concow and managed to get his elderly mother out of nearby Magalia.

Warehouses were being opened up in Chico to provide evacuees protection from the cold and rain and to move them out of the Walmart car park, said Manley's partner, Carol Daugherty.

Forecasters said the rains, which in some areas are likely to be accompanied by winds of up to 45 miles per hour (72 kph), raised risks of debris flows. The fire has burned across 153,000 acres (62,000 hectares) of the Sierra foothills.

"There's no vegetation to hold the earth and there's a risk it could just start moving, with mud carrying everything in its path," said National Weather Service forecaster Johnnie Powell in Sacramento.

Firefighters installed straw tubes known as wattles to stop hillsides being washed away and were hoping to have the fire fully contained by the weekend, said California Department of Forestry and Fire Protection spokeswoman Erica Bain.

Mass evacuations since the fire erupted on Nov. 8 have removed most people away from any debris flow, National Weather Service (NWS) hydrologist Cindy Matthews said.

Authorities in Butte County, where Paradise is located, have been gradually allowing residents evacuated during the fire back to see what is left of their homes.

Lisa Knight found only ash and rubble when she returned to her house in Butte Creek Canyon, east of Chico.

"I mourn for everybody. It's not just one personal loss, it's the loss of my neighbours and my community," Knight told KRCR-TV.

The death toll of the fire has been gradually rising, with two more names added to the list on Wednesday to bring the total to 83.

The number of missing persons, which has fluctuated widely over the past week, continued to decline. There were some 1,200 people identified as missing over the weekend before falling to fewer than 700 on Monday, as some people who initially were unaccounted for either turned up alive or were confirmed dead.

The number of residents needing temporary shelter was unclear, but as many as 52,000 people were under evacuation orders at the height of the firestorm last week.

The Camp Fire incinerated 13,503 homes in and around Paradise. The cause of the fire remains under investigation.