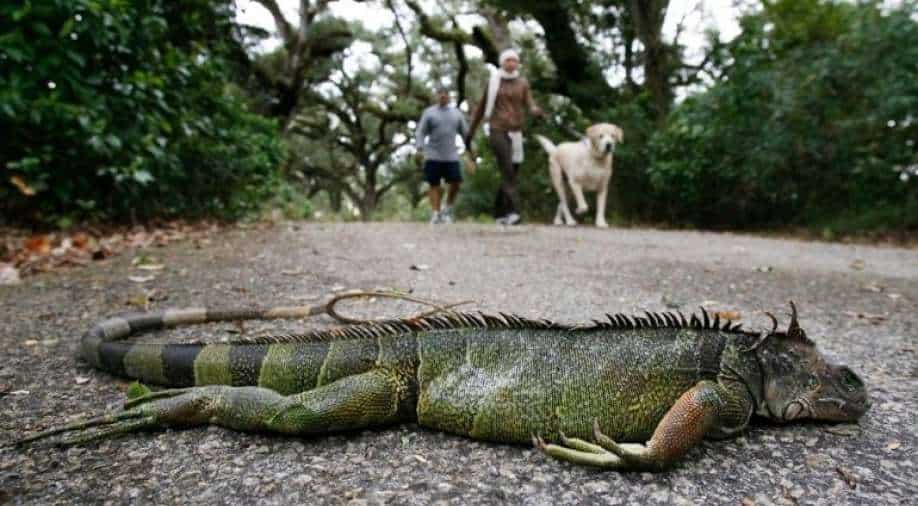 Frozen Iguanas are falling out of trees in Florida because it's so cold Photograph:( Twitter )

Only just recovered from the hurricane season, Floridians now face a new menace, showers of iguanas.

The Sunshine State is suffering an unusual cold snap with temperatures set to fall to freezing at Christmas due to which news forecasters have issued a warning that iguanas will start falling from trees.

Dec 21 - Brrr! Much colder temps expected for Christmas. Low temperatures in the 30s/40s and falling Iguanas are possible. Keep up with forecast changes and stay warm! #flwx pic.twitter.com/BRYfugIE5Q

The cold-blooded lizards literally freeze up when the temperature drops below four degrees Centigrade (39 Fahrenheit) and fall from on high, posing a real danger for anyone underneath.

Iguanas are not native to Florida, having shown up and taken over South Beach and beyond after gaining a toehold in the state in the 1960s. They’ve been spotted from Gainesville to the Florida Keys. But while they’ve clearly taken a liking to the Sunshine State, they haven’t quite adapted to the infrequent cold spells that can sometimes hit.

In recent years the authorities have urged Floridians to cull as many of the illegal immigrants as they can, with iguanas slipping over the Mexican border and in from the Caribbean in vast numbers.

Frost can't kill them, however, and some misguided locals have been known to cover fallen lizards in towels to warm them up or even take them home -- a big no-no for experts.

For defrosted iguanas are particularly dangerous and can quickly turn vicious.