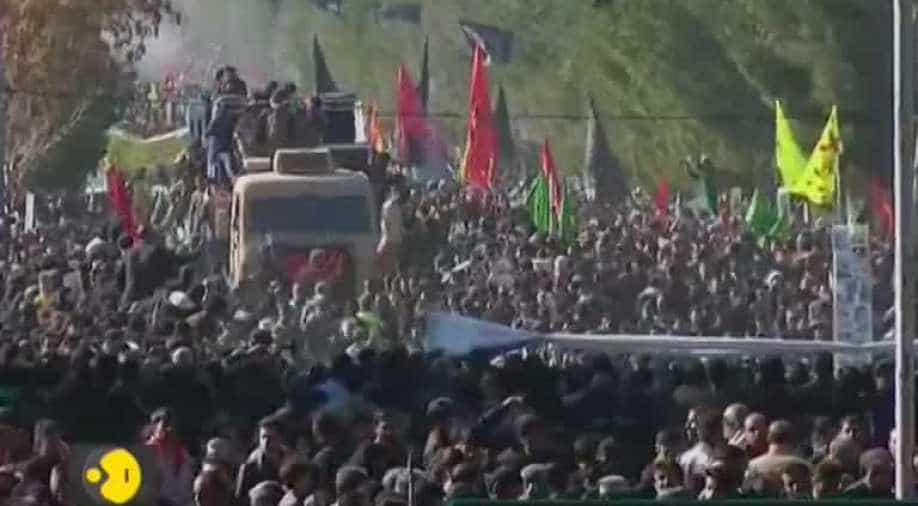 Iraqi mourners held a funeral procession for militia commander Abu Mahdi al-Muhandis on January 7, who was killed by U.S. air strike at Baghdad airport. A stampede erupted at the funeral procession, killing 35 people and injuring 48 others. According to the report the stampede took place in Kerman, the hometown of Revolutionary Guard Gen. Qassim Suleimani. #WION #SuleimaniKilling #SuleimaniFuneral
Follow Us

Soleimani, the hugely popular head of the Guards' Quds Force, was assassinated on Friday in a US drone strike near Baghdad international airport, an operation that shocked the Islamic republic.

A deadly stampede erupted on Tuesday at the funeral procession for a top Iranian general Qasem Soleimani, killing 35 people and injuring 48 others.

The procession was being held in Soleimani's hometown of Kerman, where he will be laid to rest later in the day, according to state media.

"Unfortunately because of overcrowding 32 of our citizens lost their lives in the procession... and 190 were injured," the head of the country's emergency services, Pirhossein Koolivand, told the channel.

The injured were immediately transferred to hospital, he added.

AFP correspondents in Kerman said the streets of the southeastern city were packed with mourners for the funeral of Revolutionary Guards commander Qasem Soleimani in his hometown.

People were seen taking refuge on hillsides around the city on state television.

Soleimani, the hugely popular head of the Guards' Quds Force, was assassinated on Friday in a US drone strike near Baghdad international airport, an operation that shocked the Islamic republic.

Tuesday's funeral comes after days of processions through the southwestern city of Ahvaz and the shrine cities of Qom and Mashhad as well as the capital Tehran.