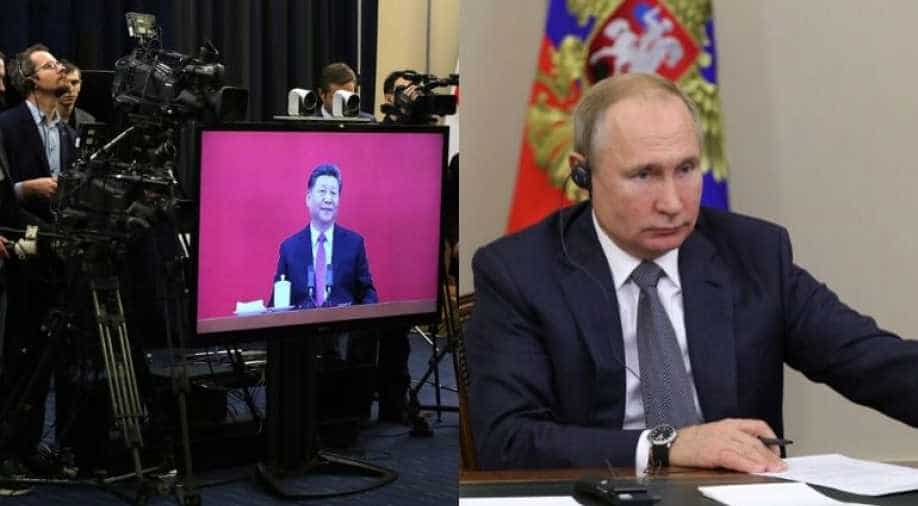 A screen shows Chinese President Xi Jinping as Russian President Vladimir Putin takes part in a ceremony inaugurating the "Power of Siberia" pipeline via a video link in Sochi on December 2, 2019. Photograph:( AFP )

The new pipeline also called "Power of Siberia" pipeline will start from the Russian border in Heilongjiang and will link China's Jilin and Liaoning.

"This is a genuinely historic event not only for the global energy market but above all for us, for Russia and China," Putin said via a video link in Sochi.

"This step takes Russo-Chinese strategic cooperation in energy to a qualitative new level and brings us closer to (fulfilling) the task, set together with Chinese leader Xi Jinping, of taking bilateral trade to $200 billion by 2024," the Russian president added.

The new pipeline also called "Power of Siberia" pipeline will start from the Russian border in Heilongjiang and will link China's northeastern province Jilin and Liaoning.

Xi said it was "a landmark project of bilateral energy cooperation" and an "example of deep integration and mutually beneficial cooperation".

Russia is in fact set to boost gas trade by supplying to European countries - its principal market, while trying to set up its gas commerce elsewhere.

In January, Russia and Turkey will launch the TurkStream while Nord Stream-2 will boost gas output with Germany next year.

Ahead of the opening of the Siberia pipeline, Putin's spokesman Dmitry Peskov had said that the significance of the pipeline was hard to overestimate.

The pipeline will be fully operational in 2025.