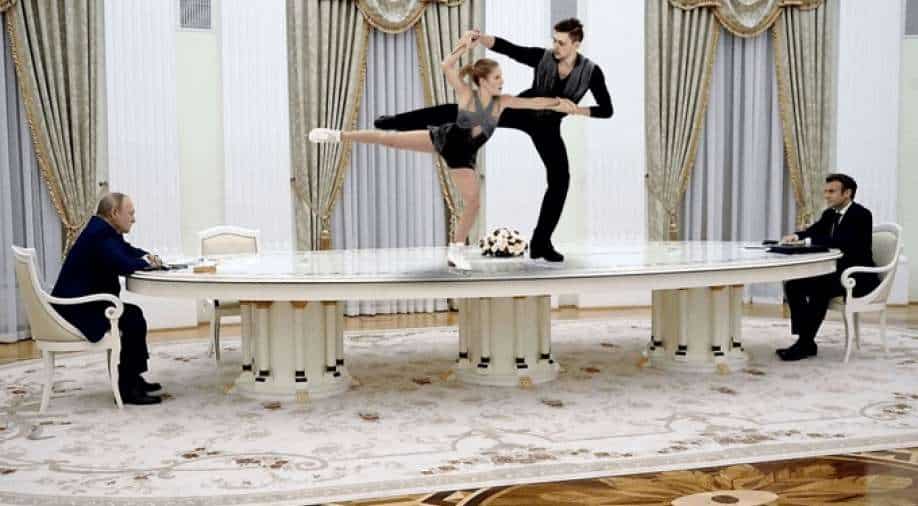 Ever since reports have come out that Russia has amassed over 100,000 troops near the Ukraine borders, hectic diplomatic parlays have been taking place to defuse the tense situation

Ever since reports have come out that Russia has amassed over 100,000 troops near the Ukraine borders, hectic diplomatic parlays have been taking place to defuse the tense situation.

Even though the meeting took place in the backdrop of a war-like situation with the US and Russia exchanging warnings over the Ukraine crisis, an image of the two released by the state media certainly raised eyebrows of the netizens.

The image drew a lot of attention. Not because of the issues discussed during the meeting, rather the way they were seated left the twitteraits in splits.

The netizens couldn’t help but notice how far Macron was sitting over a gigantic table from Putin.

Soon, memes started to pour in on how two were “committed” to keep their distance.

Will Putin and Macron do face painting after? #Ukraine #pointless #lipservice pic.twitter.com/hi9agrWzmZ

Macron flew into Moscow at the start of a week of intense Western diplomacy aimed at easing fears of a Russian invasion of its pro-Western neighbour.

Sitting across a long table from Putin at the Kremlin, Macron said he was in Moscow to address the "critical situation" in Europe.

Macron told reporters the coming days would be "decisive" and "require intensive discussions which we will pursue together".