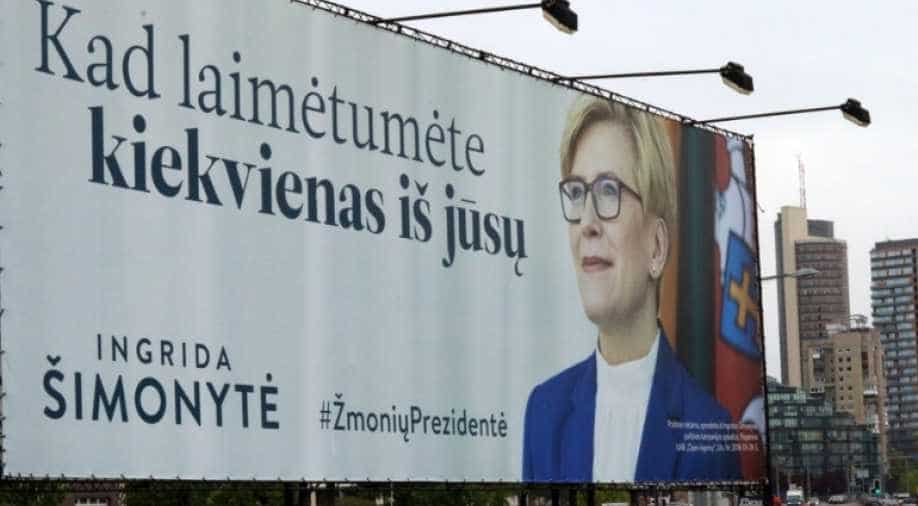 The election campaign has been dominated by concerns over growing social inequality in the eurozone Baltic state.

Lithuanians go to the polls on Sunday to elect a new president after a campaign dominated by concerns over growing social inequality in the eurozone Baltic state.

Following are snapshots of the top three candidates:

Simonyte: liberal with austerity past

Economist Ingrida Simonyte was thrust into the public spotlight when appointed to oversee biting austerity measures during the 2009 global financial crisis. That saw Lithuania's economy shrink by nearly 15 per cent.

She drew sharp criticism for deep cuts to public salaries and state pensions, but her supporters insist bold actions helped return the economy to growth the following year without a currency devaluation.

After conservatives lost elections to leftists in 2012, Simonyte was a central bank deputy governor in 2013-2016, before winning a seat in parliament in 2016.

Charming the media with her sharp sense of humour, she is also an open supporter of gay rights and has many followers among young, urban and liberal voters in the predominantly Catholic country.

The 44-year-old won conservative party primaries last year and is their official nominee, but has never been a party member of the Homeland Union - Lithuanian Christian Democrats.

Simonyte, who is single, is fluent in English, Russian and Polish as well as her native Lithuanian, and speaks some Swedish. A fan of rock music and ice hockey, she also enjoys reading, Nordic walking and gardening.

Skvernelis joined the police force as a beat officer in 1998, working his way up to deputy national commander after a decade, then police chief in 2011.

His wide-ranging reforms targeted corruption and road safety, making a lasting impression that won him respect and popularity.

Skvernelis launched his political career in 2014 by swapping his uniform for a suit and the office of the interior minister.

He became prime minister after leading the list of the centre-left Lithuanian Farmers and Green Union in the 2016 elections but has also never formally joined the party.

Skvernelis has positioned himself as an alternative to business and political elites, and has pledged to continue fighting corruption and offered generous spending to combat poverty. These measures have won him considerable popularity in rural areas and among older voters.

Never one to shy away from speaking his mind, Skvernelis has had verbal run-ins with several politicians.

For critics, his running feud with President Dalia Grybauskaite, the country’s most popular politician -- and with some journalists -- have raised doubts about whether he possesses the gravitas expected of the head of state.

Skvernelis, 48, speaks Russian, Polish and some English. He is a married and a father of two who enjoys gardening and basketball, Lithuania's national sport.

Gitanas Nauseda is a political novice who spent most his career in commercial banking, most recently as an advisor to the president of Lithuania's top bank.

For the last decade, he has been in the public eye as an articulate commentator on economic and financial matters and kept a moderate and measured stance on almost all issues.

The 54-year-old is not backed by any major political force and has positioned himself as a figure of compromise, while also describing his views as centre-right.

For his supporters, who include former president Valdas Adamkus, Nauseda is a much needed fresh face with the intellectual capacity and demeanour to bring more harmony into politics.

His critics, however, see him as a two-faced candidate serving big business.

He is fluent in English, German and Russian, is married and a father of two daughters. He enjoys collecting rare books and playing chess.