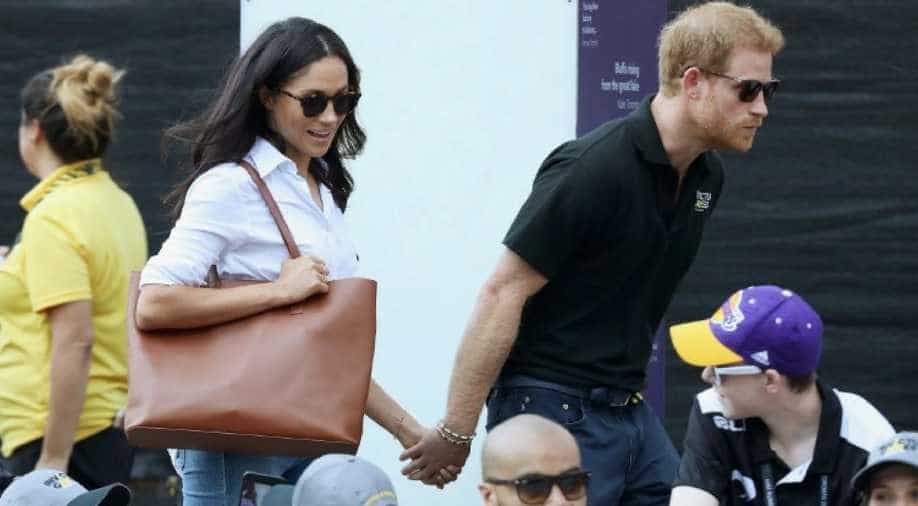 The couple leave after watching an exciting and inspiring game of wheelchair tennis Photograph:( AFP )

Prince Harry and girlfriend-actress Meghan Markle made headlines after they were photographed holding hands in Toronto at the wheelchair tennis event as part of Invictus Games 2017.

The event on Monday marked their first official public appearance as a couple.

The couple left hand in hand for Toronto's city hall after a match of the wheelchair tennis between Australia and New Zealand at the small venue.

They were also photographed exchanging a few laughs.

The couple have been dating since last year (AFP)

The prince was seen sporting an "Invictus Games" polo shirt and jeans while the America actress also kept it low in a white button-down shirt with ripped blue denim jeans.

The two were earlier spotted at the Invictus Games opening ceremony this weekend. Meghan was spotted cheering from the stands while Harry was seated in the VIP section with US First lady Melania Trump besides him.

Prince Harry was seated next to US First Lady Melania Trump while his girlfriend Meghan Markle sat 18 seats to his left and three rows in front with her good friend. (Reuters)

Both the prince and his lady are in Toronto attending the Invictus Games in its third season. The first Invictus Games, based on the Paralympic Games, were held in September 2014 in London. They were launched by Prince Harry, who served with the British Army in Afghanistan. He was inspired to create the Games, in order to help wounded and sick military personnel and their families.

The couple has been photographed together in the past but this is the first time they have appeared together at an official event. Their relationship news thickened after the actress in an interview to magazine Variety went on record to say: "We're two people who are really happy and in love."

Prince Harry has been dating Markle since last year.