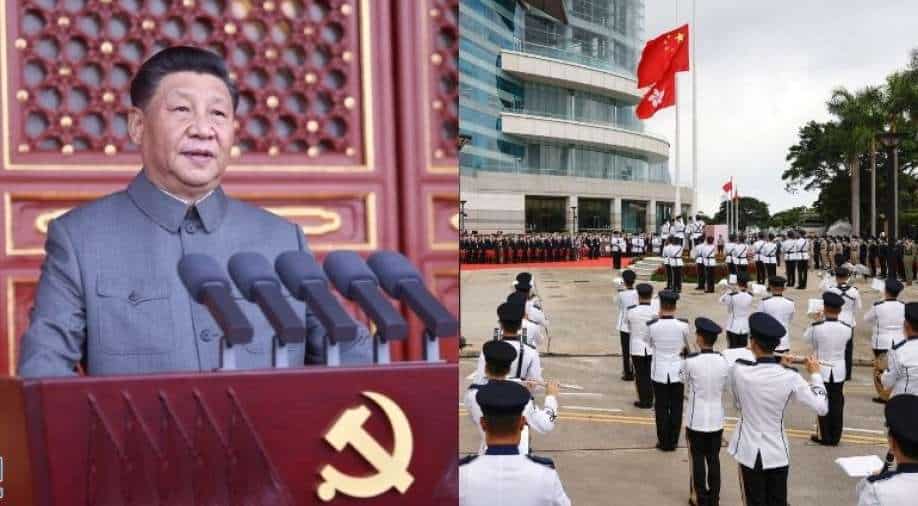 Chinese President Xi Jinping speaks at the medal award ceremony marking the 100th founding anniversary of the Communist Party of China, at the Great Hall of the People in Beijing, China Photograph:( Agencies )

Xi Jinping and the party are riding high as China recovers briskly from the COVID-19 outbreak and takes a more assertive stand on the global stage, although Beijing also faces criticism over its actions in Hong Kong and Xinjiang, and contends with a worsening demographic outlook that imperils long-term economic growth

Chinese President Xi Jinping on Thursday hailed an "irreversible" course from colonial humiliation to great-power status at the centenary celebrations for the Chinese Communist Party.

In a televised address from Tiananmen Square in the centre of Beijing, Xi said China had achieved its centenary goal of building a "moderately prosperous society", and emphasised its sense of nationalism.

"The Chinese people will never allow any foreign forces to bully, oppress, or enslave us. Anyone who dares try to do that will have their heads bashed bloodied against the Great Wall of Steel forged by over 1.4 billion Chinese people," Xi told thousands of attendees who responded with claps and loud cheers.

Drawing a line from the subjugation of the Opium Wars to the struggle to establish a socialist revolution in China, Xi said the party had brought about "national rejuvenation" lifting tens of millions from poverty and "altered the landscape of world development".

Xi, wearing a Mao-style jacket, added the "great rejuvenation of the Chinese nation has entered an irreversible historical course" and vowed to continue to build a "world-class" military to defend national interests.

Jinping and the party are riding high as China recovers briskly from the COVID-19 outbreak and takes a more assertive stand on the global stage, although Beijing also faces criticism over its actions in Hong Kong and Xinjiang, and contends with a worsening demographic outlook that imperils long-term economic growth.

In the summer of 1921 Mao and a clutch of Marxist-Leninist thinkers in Shanghai founded the party which has since morphed into one of the world's most powerful political organisations.

It now counts around 95 million members, garnered over a century of war, famine and turmoil, and more recently a surge to superpower status butting up against Western rivals, led by the US.

In a ceremony of pomp and patriotism, thousands of singers, backed by a marching band, belted out stirring choruses including "We Are the Heirs of Communism" and "Without the Communist Party there would be no New China" as maskless invitees cheered and waved flags in a packed Tiananmen Square.

A fly-by of helicopters in formation spelling '100' a giant hammer and sickle flag trailing and a 100-gun salute followed while young communists in unison pledged allegiance to the party.

Xi, whose speech braided the economic miracle of China with the longevity of the party, has cemented his eight-year rule through a personality cult, ending presidential term limits and declining to anoint a successor.

He has purged rivals and crushed dissent, from Uyghur Muslims and online critics to pro-democracy protests on Hong Kong's streets.

The party has pivoted to new challenges; using tech to renew its appeal to younger generations, 12.55 million members are now aged 30 or younger, while giving a communist finish to a consumer economy decorated by billionaire entrepreneurs.

While the president did not mention himself in the speech, "it is quite clear that much of the credit for China's success belongs to Xi," said Willie Lam, China analyst at the Chinese University of Hong Kong.

Xi has presented a defiant face to overseas rivals, revving up nationalist sentiment. He has batted back criticism of his government's actions in Hong Kong, attitude towards Taiwan and treatment of the Uyghurs.

In its 100th year, the party has delivered a selective version of history through films, 'red tourism' campaigns and books, which dance over the mass violence of the Cultural Revolution, famines and the Tiananmen Square crackdown.

Instead, it has drawn attention to China's rebound from COVID-19, which first emerged in the central city of Wuhan but has been virtually extinguished inside the country.

But reminders linger of the risks to stability.

Thursday also marks the 24th anniversary of Hong Kong's return to Chinese rule, a date once met with mass demonstrations against Beijing inside the former British colony.

One year ago, China imposed a draconian national security law on the city in response to huge, often violent, pro-democracy protests.

The measure has seen activists charged, anti-China slogans criminalised and even the closure of a critical newspaper as the law sinks the once freewheeling city into what Amnesty International calls a "human rights emergency".

Four activists marched with a banner near the official anniversary reception on Thursday, tailed by 200 police officers, a fraction of the thousands deployed across the city to deter pro-democracy groups from mobilising.