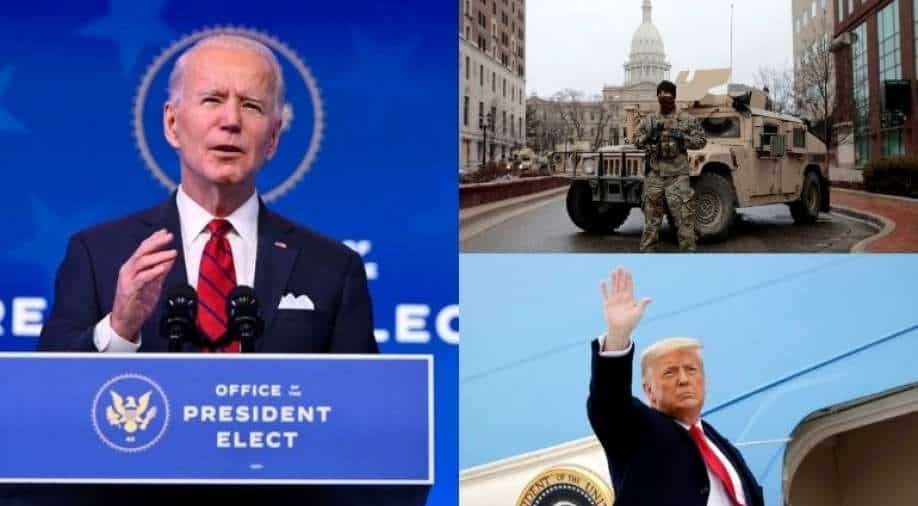 Tens of thousands of security personnel from the National Guard and law enforcement agencies have descended upon Washington, D.C., to bolster security ahead of Biden's inauguration ceremony

President-elect Joe Biden's top advisors on Sunday outlined his plans for his inauguration along with the nation's multiple crises while balancing the impeachment trial of Donald Trump.

With war-zone-like security, no crowds, and coronavirus distancing for guests, Joe Biden's swearing-in as the 46th US president will be a muted affair, unlike any previous inauguration.

Tens of thousands of security personnel from the National Guard and law enforcement agencies have descended upon Washington, D.C., to bolster security ahead of Biden's inauguration ceremony.

The nationwide security uptick followed the attack on the US Capitol in Washington by a mix of extremists and Trump supporters, some of whom called for the death of Vice President Mike Pence as he presided over the certification of Democrat Joe Biden's election victory.

The FBI and other federal agencies have warned of the potential for future violence leading up to Biden's inauguration on Wednesday, as white supremacists and other extremists seek to exploit frustration among Trump supporters who have bought into his falsehoods about electoral fraud.

Security officials had eyed Sunday as the first major flashpoint, as that is when the anti-government "boogaloo" movement made plans weeks ago to hold rallies in all 50 states. But by late Sunday afternoon, only handfuls of demonstrators had taken to the streets alongside much larger crowds of law enforcement officers and media personnel.

As the president-elect prepares to take power in a city where only two weeks earlier Trump supporters launched a violent attempt to overturn the election, Biden faces overlapping crises: not only the pandemic but a struggling economy, climate change, and racial tensions.

Biden wants Congress to act quickly on a massive, $1.9-trillion stimulus package to revive the economy, and he plans a blitz to accelerate America's stumbling Covid vaccine rollout.

His target of seeing 100 million doses of coronavirus vaccine injected within his first 100 days in office is "absolutely" achievable, top US scientist Anthony Fauci told NBC on Sunday.

But the coming Senate impeachment trial, an unprecedented second for Trump, casts a shadow over Biden's path forward.

Democratic congressional leaders Nancy Pelosi and Chuck Schumer have yet to say when the trial will begin.

Biden has said he hopes Congress can deal with that stark distraction even while advancing his aggressive agenda.

Adding to the uncertainty is a badly riven Republican Party, divided over Trump's false assertions that he won November's election, his fanning of emotions ahead of the deadly Capitol invasion, and on the future direction of the party.

Plans for the inauguration, in normal times a bracing, even joyous, tribute to a peaceful transition, had already been scaled-down out of pandemic concerns. Fears of new violence by unyielding Trump supporters after the January 6 riot have cast a further pall.

"This will be an inaugural like no other, in large part because of Covid," Vice President-elect Kamala Harris said in an interview aired Sunday on CBS.

"But we are going to get sworn in. And we're going to do the job we were hired to do."