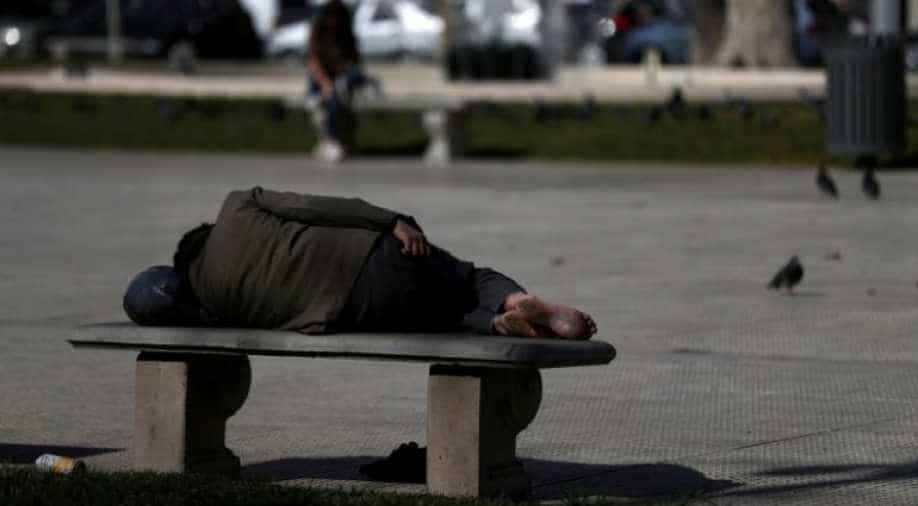 A homeless man sleeps on a bench outside the Casa Rosada Presidential Palace during the coronavirus disease (COVID-19) outbreak, in Buenos Aires, Argentina August 4, 2020 Photograph:( Reuters )

Nearly half of Argentina's population was dragged into poverty in the second quarter of this year by the brutal effects of the the coronavirus pandemic on the country's longstanding economic crisis, researchers estimated on Wednesday.

Ahead of official government figures due later in the day, the Catholic University of Argentina (UCA) estimated the poverty rate spiked to between 46% and 47% by the end of June following months strict lockdowns to battle the coronavirus.

"There is greater general poverty. We are all a little poorer - we already were last year - and now with greater inequality," said UCA researcher Agustín Salvia.

He blamed the loss during the pandemic of 3.5 million jobs, mostly informal, for the rise, which was up from the 40.8% poverty rate recorded by UCA at the end of last year. The poverty line is drawn at 14,718 pesos ($193) per month.

According to the government's official statistics agency Indec, 35.5% of Argentines were living in poverty in the second half of 2019. Indec will publish the official figure for the first half of 2020 later on Wednesday.

The numbers reflect an everyday reality for Argentines like Guillermo Garay, who works as a street vendor during sporting events and saw his livelihood virtually disappear under the pandemic shutdowns.

"I survived because of family that supported me, because I had no possibility of doing anything," Garay said while selling Argentine flags at a protest in the capital, Buenos Aires.

Argentina's economy contracted a record 19.1% in the second quarter versus a year earlier as the coronavirus crippled production and demand, and is on track for a 12% economic plunge in 2020, analysts say.

Small companies that produce for the domestic market were hit particularly hard as activity came to halt and businesses closed across the county for months beginning in March, driving unemployment up to 13.1% in the second quarter.

Argentina recently struck a deal with its creditors to restructure about $65 billion in foreign debt and has a bumpy fiscal road ahead, sapping the spending power for social programs that could have helped alleviate the effect of the pandemic on the poor.

"To get out of this poverty crisis requires a lot of imagination on the part of those in charge. The traditional programs of a few public works and a slight improvement in wages will not be enough," said local economist Andrés Asiain.

Salvia said it seemed unlikely that poverty levels would improve in the immediate future, and predicted about 45% of Argentines would still be in poverty at the end of the year.

"To get back to the 35% (poverty rate) we had before the crisis, which was already a scandal, I do not see it possible this year or next year," Salvia said.