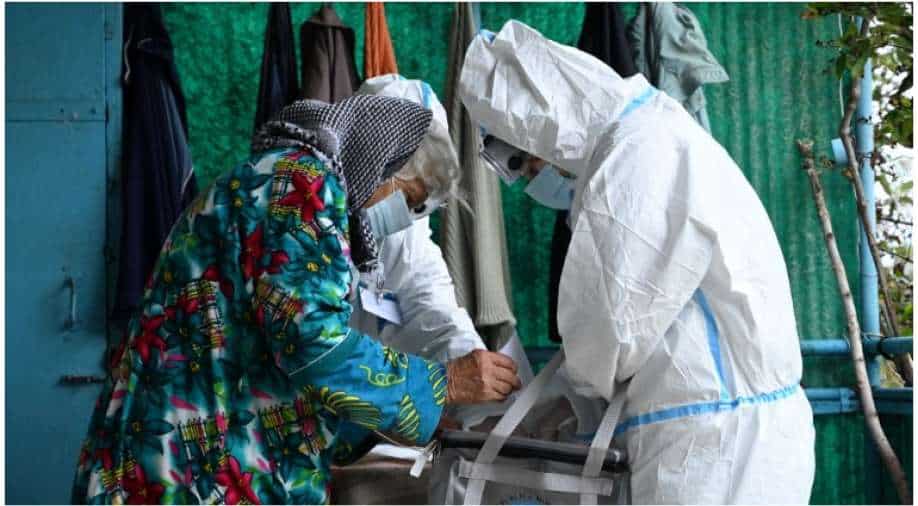 A member of a local electoral commission wearing personal protective equipment (PPE) holds a mobile ballot box as an elderly woman casts her vote for Moldova's presidential election in the village of Stetcani, some 40 km north of Chisinau, on November 1, 2020, amid the ongoing coronavirus disease pandemic. Sergei GAPON / AFP Photograph:( AFP )

Wedged between Ukraine and EU member Romania, Moldova has long been divided over closer ties with Brussels or maintaining Soviet-era relations with Moscow

Polling stations in Moldova opened Sunday with voters eager to elect a new parliament after the previous one was dissolved by President Maia Sandu to shore up her position against pro-Russia forces.

Sandu, who wants to bring Moldova into the European Union, in November defeated Kremlin-backed incumbent Igor Dodon on a pledge to fight corruption in one of Europe's poorest countries.

Wedged between Ukraine and EU member Romania, Moldova has long been divided over closer ties with Brussels or maintaining Soviet-era relations with Moscow.

"After so many years, this country has some kind of hope to drive out the thieves who are sitting here for Russian money and to choose those who serve the country honestly," a 29-year-old woman, who only gave her name as Nataliya, told AFP as she voted for Sandu's centre-right Action and Solidarity (PAS) party at a polling station in central Chisinau.

At polling stations, voters had to wear masks and have their temperature taken in a bid to prevent the spread of the Covid-19 virus.

"We have a chance to get rid of thieves and choose a holistic and good government," Sandu said in a video address Thursday, speaking in Moldova's main language Romanian.

In another speech in Russian -- the ex-Soviet country's second language -- she said: "The time for change is coming in Moldova."

The slogans resonate with many Moldovans, who in recent years have seen their country rocked by political crises, including a $1-billion bank fraud scheme equivalent to nearly 15 per cent of the country's gross domestic product.

Sandu, who also served briefly as prime minister, has for many Moldovans become "a symbol of change", said Alexei Tulbure, a political analyst and the country's ex-ambassador to the United Nations.

Arguing that Moldovans were tired of corrupt politicians, he said Sandu was the first to make it to the top while "maintaining a reputation for being honest".

Twenty parties and two electoral blocs are running in the election.

They must cross thresholds set at five per cent and seven per cent of the votes respectively to obtain seats in the unicameral assembly, where 101 lawmakers are elected for four-year terms.

Ahead of the vote, Sandu's PAS party appeared to be leading, with the latest polls giving them a 35-37 per cent share of the vote.

Their main rivals from the coalition of socialists and communists led by Dodon and former President Vladimir Voronin were polling at 21-27 per cent.

Those figures only account for voters living in the country of 2.6 million people.

Analysts say the diaspora -- which accounts for more than a third of Moldova's eligible voters and already threw its support behind Sandu during the presidential polls -- could hold the key and could bring the PAS another 10-15 percentage points this time round.

Analysts say the election will likely be a blow to Russia, which wants Moldova to remain in its sphere of influence.

"The party of pro-Russian ex-president Igor Dodon will finally lose control of the central government in the country, and allies of President Maia Sandu will form a mono-majority," the independent Ukrainian news website Yevropeiska Pravda said in an editorial Saturday.

However, the main "enemy" of the PAS party could prove to be the summer, when young people -- Sandu's main electorate -- might lack the motivation to vote, Yevropeiska Pravda added.

Sandu has already irritated the Kremlin by proposing to remove the Russian military garrison based in Transnistria, a pro-Russian breakaway state straddling the country's eastern frontier with Ukraine.

On Friday, pro-Russia Dodon accused authorities of preparing "provocations" and urged his supporters to be ready to protest to "defend" his bloc's victory.

Lyudmila, a 70-year-old pensioner, said she supported communists and the socialists because "life was better" under their rule.

"There was order under the communists," she told AFP after casting her vote.