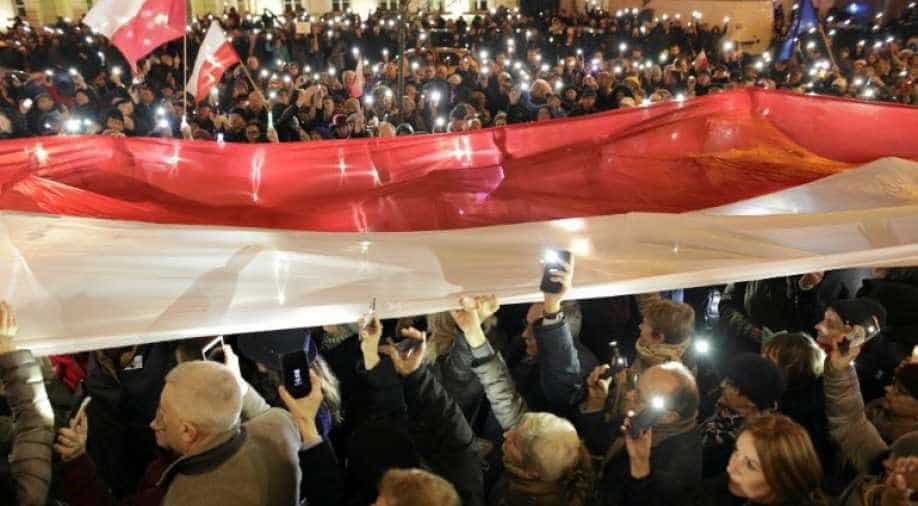 Demonstrators hold a rally to protest against changes to Poland's judiciary planned by the ruling Law and Justice party in Lublin, Poland Photograph:( Reuters )

Poland's ruling nationalists signaled on Thursday they plan to water down legislation allowing for judges to be disciplined for questioning judicial reforms, in an apparent attempt to ease a dispute between Brussels and Warsaw over democratic standards.

The European Union has accused the ruling Law and Justice (PiS) party of politicising the judiciary ever since it came to power in 2015. PiS argues that the reforms are necessary to make Poland's courts more efficient.

The nationalist government has introduced draft legislation providing for the disciplining of judges who have questioned the independence of peers nominated by a panel set up under new rules drawn up by the PiS-dominated parliament.

One of PiS's smaller partners, Porozumienie, which depicts itself as a pro-business party, has since come under opposition pressure to partially block the reform. Porozumienie recently impeded another reform planned by the PiS.

On Thursday state news agency PAP quoted Porozumienie head, Jaroslaw Gowin, as saying that ruling politicians would adopt amendments to the bill aimed at removing its two most criticized parts.

These are disciplinary measures against judges questioning the legitimacy of their peers appointed by the new panel, and a part of the bill that forced judges to reveal the names of social media accounts they use under pseudonyms.

"There's an agreement ... amendments (to the proposed bill) will be adopted," Gowin was quoted as saying by PAP.

On Wednesday thousands of people poured onto the streets to protest against what they saw as an attempt by PiS to further browbeat judges. On Thursday the lower house of parliament started the debate on the judicial reforms.

PiS, which won a second term in October, says it will continue the reforms to try to rid the judiciary of communist leftovers, despite EU criticism over adherence to the rule of law and threats to cut off vital EU funding.

During the parliamentary debate, opposition parties accused the PiS of using the new legislation as a tool to intimidate judges so they rule in line with the party's expectations.

"The real reason is your panic attempt to escape accountability. You know that the time of your defeat is coming and you will be held accountable at Polish courts for all your scandals," opposition MP Borys Budka told deputies.