Modi was on Wednesday remanded in custody till March 29. He had offered half a million pounds for his bail but the judge turned him down, saying he was 'too risky'.

London's Westminster court on Wednesday remanded Punjab National Bank (PNB) scam accused Nirav Modi, 48, in custody. It was the first time the fugitive businessman had been in court.

Nirav's whereabouts were a hot button issue in India; he was reportedly arrested as he was trying to open a bank account. A bank clerk recognised him from his passport and called the police. His lawyer, however, argued in court that Nirav, an economic offender, had been living openly in the UK.

The judge hearing the case agreed with the prosecution and decided not to grant bail. The scam accused was remanded in custody till March 29.

Before making his decision, the judge took a ten-minute break and then dismissed Nirav's bail plea. The judge did not consider the possibility of giving him bail.

Modi had offered half a million pounds for his bail but the judge refused to entertain his plea since he found him "too risky". Nirav Modi's counsel, George Hepburne, said that the case had a political motivation and that the conditions of Indian jails are not good. This was rejected by the judge.

According to procedure, a case has to be heard in India against Nirav of defrauding Punjab National Bank; if it is proved, then the judge might extradite him.

District judge Marie Mallon denied bail to Modi and remanded him to custody, saying there was substantial grounds to believe that he would fail to surrender if granted bail.

The judge who will hear the case is Emma Arbuthnot who is hearing Vijay Mallya's case.

Mallya, 63, has since filed an application seeking leave to appeal against his extradition ordered by UK home secretary Sajid Javid last month.

Nirav Modi's arrest came days after a London court issued an arrest warrant against him in response to a request by the Enforcement Directorate(ED) for his extradition in a money laundering case.

Modi and his uncle, Mehul Choksi, are the main accused in the PNB scam and they both left India before the details of the fraud came to light in January 2018. 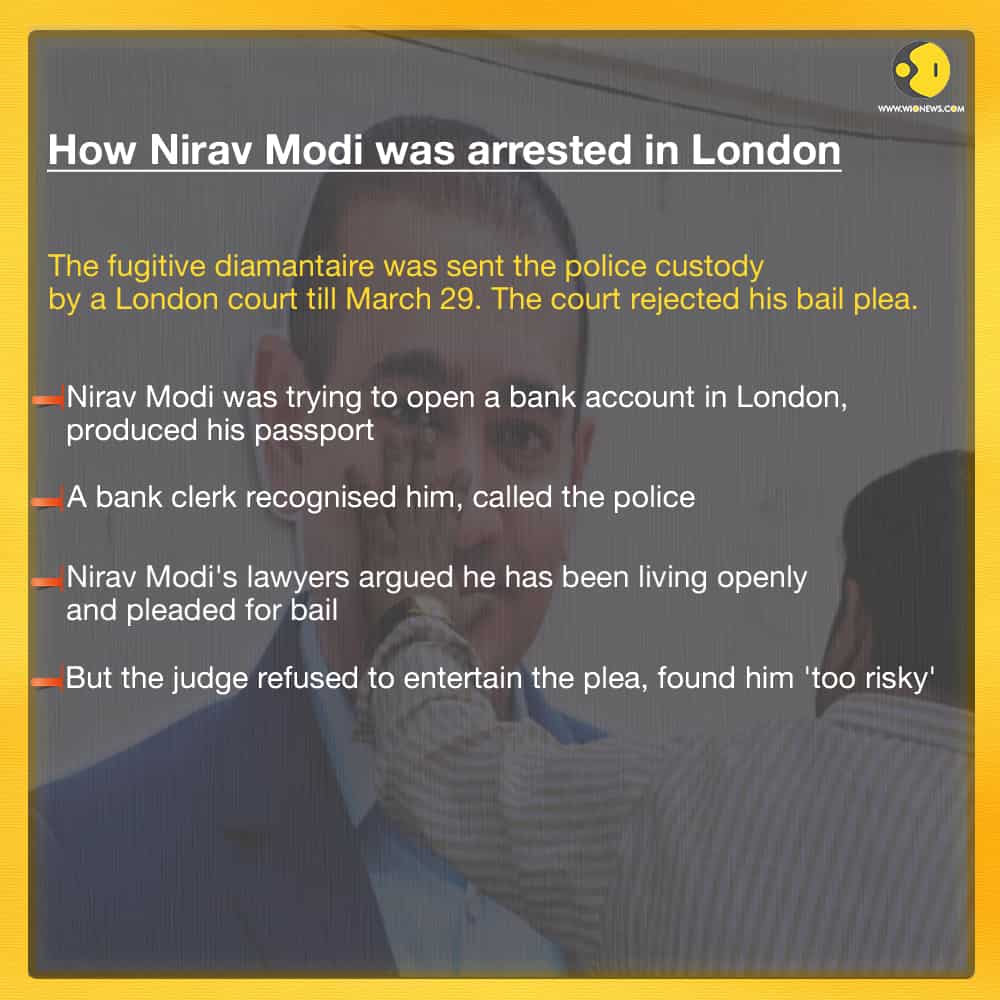