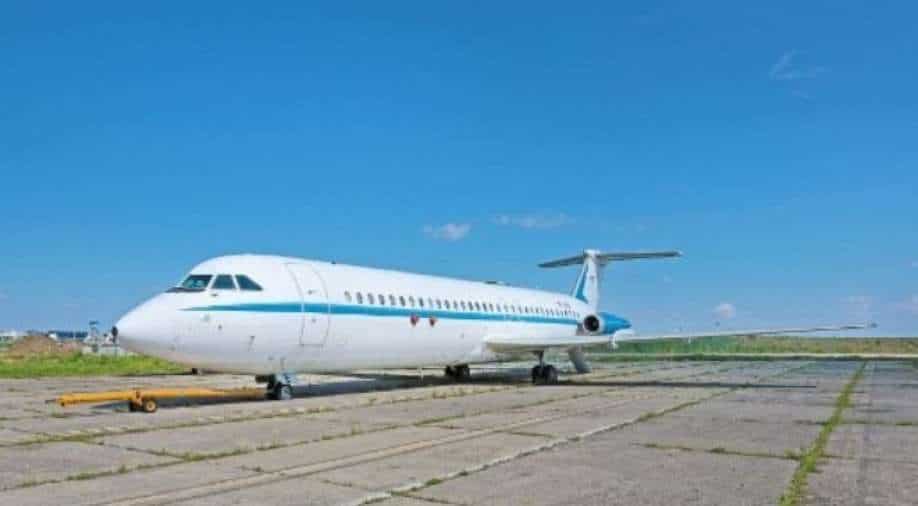 Rolled out in 1986, it was part of Ceausescu's fleet until December 1989, when he was overthrown and, together with his wife Elena, executed

With "Socialist Republic of Romania" once emblazoned on its side, a Rombac plane, part of ex-dictator Nicolae Ceausescu's fleet, went under the hammer on Thursday and was finally sold for 120,000 euros (146,000 dollars).

Some 150 collectors and aviation enthusiasts were expected to compete -- online and by phone -- for what auction house Artmark called the sale's "gem", which carried a starting price of 25,000 euros ($30,500), spokeswoman Alina Panico told AFP.

At the same auction, a luxury car model Paykan Hillman Hunter given to Ceausescu by the Shah of Iran in 1974 was sold for 95,000 euros (115,000 dollars) to a Romanian collector.

The medium-haul Rombac Super One-Eleven was made in Bucharest under licence from the British Aircraft Corporation (BAC), making the country the first in eastern Europe to produce air planes.

Rolled out in 1986, it was part of Ceausescu's fleet until December 1989, when he was overthrown and, together with his wife Elena, executed.

Seen by Ceausescu "as a crowning achievement of Romanian industry", according to Artmark, it was the fifth of nine built under a 300-million-pound contract.

"We were proud of this type of aircraft, which at the time included cutting-edge solutions," said Gheorghe Marica, a retired military pilot who has flown the plane.

Ceausescu had demanded that his planes include a bedroom and an office, where he and his wife could play their favourite game backgammon, according to a former Boeing pilot of the couple, who requested anonymity.

This Boeing pilot and several others told AFP that Ceausescu didn't travel in the Rombac itself, as Artmark has said, but instead preferred a Boeing 707.

After Ceausescu's fall, the aircraft was included in state aviation company Romavia's fleet. It was lent to Pakistan's Aero Asia for some time before being left in a hangar.

Romavia went bankrupt in 2014, and its assets were put up for sale.

To prevent it from being sold for scrap, a handful of enthusiasts secured the Rombac's "national heritage" status from the current government in March.

"The device cannot be dismembered or modified, and above all cannot leave Romanian territory," Adrian Ciutan, the former Rombac technician behind the campaign, told AFP.

But it could be exhibited or -- with a significant investment -- be revived.

"It's hard to revive it. It should be re-motorised as its current motors are not authorised because of the noise they make. Also, its parts have expired," Marica said.

The plane's history dates back to Ceausescu's state visit to the UK in 1978, the first of its kind for a communist leader.

Seen at the time as a dissident within the Soviet bloc, the dictator -- who ruled Romania from 1965 -- was feted with a ride in a gilded carriage to Buckingham Palace alongside Queen Elizabeth II and a state banquet held in his honour.

The British wanted to "break the ice with the communist countries and had chosen to do so through someone who had distanced himself from Moscow," Marica told AFP.

BAC also welcomed the project as it was finding it increasingly difficult to sell its planes, which were deemed too noisy, according to the Boeing pilot.

Although Romania had committed to manufacturing 80 planes under the BAC licence, with the first Rombac taking to the skies in 1982, the government abandoned the project in 1990 after Ceausescu's fall.

Of the nine built, some flew under the colours of a small company, LAR, created by the communist regime with the sole destination of Tel Aviv.

Romania was the only country in the former communist bloc to maintain diplomatic ties with Israel after the 1967 Six-Day War.

Others were leased in the 1980s by national company Tarom to the low-cost company Ryanair.

Today all that remains is the presidential plane and a second Rombac, also put up for sale in Thursday's auction at the same price of 25,000 euros and which sold for 160,000 euros (195,000 dollars).

The others have been dismembered or abandoned at airports around the world.

Mexico: Several sensitive files stolen in cyberattack, including those about president's health scare