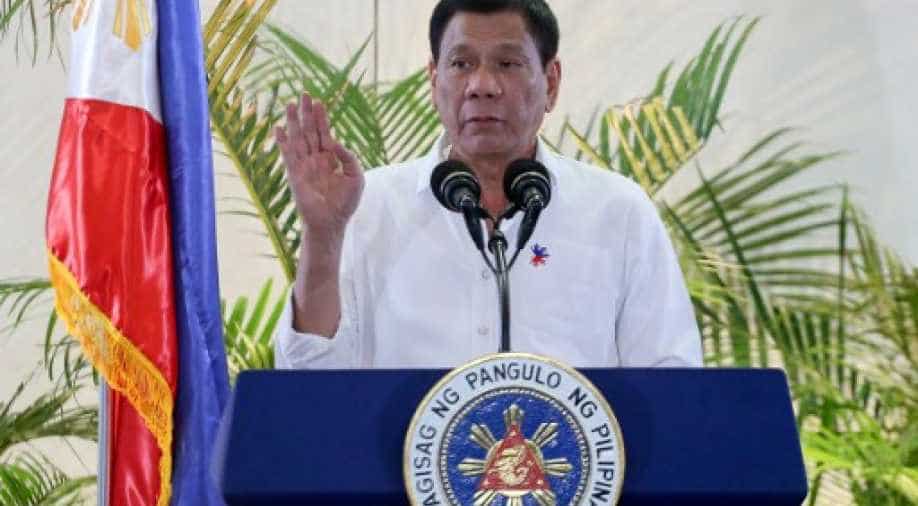 This is Philippine President Duterte's first direct threat about his intention to impose martial law in the country, in his attempt to prevent the island nation degenerating into a narco state. Photograph:( AFP )

Philippine President Rodrigo Duterte has threatened to impose martial rule to prosecute his deadly war on drugs, three decades after the nation shed dictatorship with a famous "People Power" revolt.

"If I wanted to, and it (the illegal drugs problem) will deteriorate into something really very virulent, I will declare martial law if I wanted to. No one will be able to stop me," Duterte said in a speech on Saturday night.

The 71-year-old former state prosecutor said the aim would be "to preserve the Filipino people and the youth of this land".

Duterte won elections in May last year on a pledge to wipe out illegal drugs, promising an unprecedented crackdown to stop the Philippines from becoming what he termed a narco state.

The crackdown has left at least 5,700 people dead in just over six months, raising concerns of a breakdown in the rule of law with security forces and vigilantes carrying out extrajudicial killings.

The Philippines' longtime ally, the United States, has led international criticism of the killings, with outgoing President Barack Obama urging Duterte to prosecute his war "the right way".

Duterte has reacted furiously to the criticism and vowed to continue his war until illegal drugs are eradicated.

Duterte has raised the prospect of imposing martial law previously.

However Saturday's comments were the most direct threat.

Martial rule would allow Duterte to use the military to enforce civilian law and detain people at length without charging them.

The Philippines last endured martial law during the 20-year rule of dictator Ferdinand Marcos, who was accused of plundering billions of dollars from state coffers and overseeing widespread human rights abuses.

Marcos declared martial law in 1972, invoking the threats of crime and a communist insurgency, and lifted it in 1981.

His rule ended in 1986, when millions took to the streets in the largely bloodless military-backed "People Power" revolt.

A new constitution drawn up in 1987 in an effort to avoid another dictatorship specified a single six-year presidential term.

It also said the president could impose martial rule for just 60 days and only to stop an invasion or a rebellion.

Parliament can revoke the measure within 48 hours while the Supreme Court can review its legality.

But Duterte, speaking to local businessmen in his southern home town of Davao city, warned he could ignore the 60-day limit.