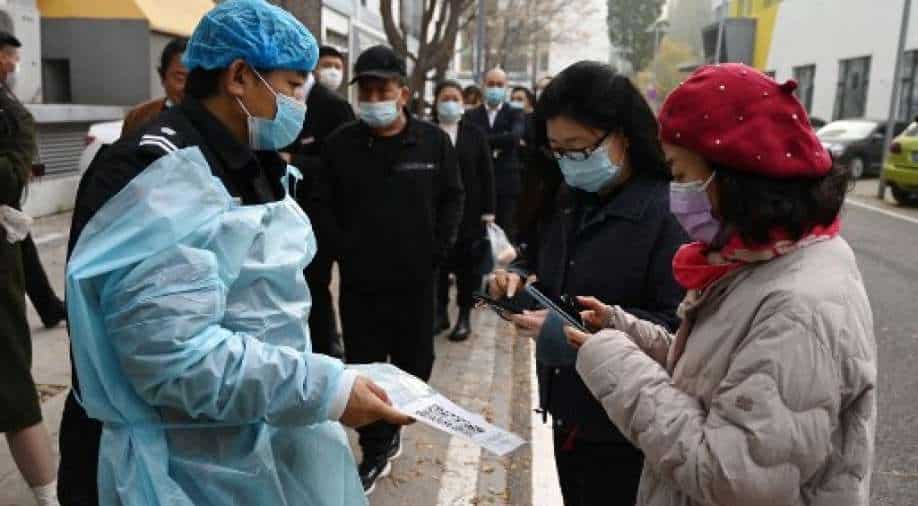 People scan a QR code to register before getting a COVID-19 test in Beijing Photograph:( AFP )

As coronavirus cases continue to mount in China, reports claim authorities in a city on Russia's border have offered up to $15,500 as a reward for information "to uncover the source of virus outbreak".

The authorities have announced the award in China's Heihe city in Heilongjiang province after the latest outbreak in which at least 240 people were infected.

The officials have also reportedly said that cross-border fishing and smuggling should also be reported. The campaign to hand out rewards to trace the virus has been declared a “people’s war”.

The development comes as China has reported several new cases especially in the northeastern border city including locally transmitted coronavirus cases since August which has worried health officials.

Heihe located in Russia's border had reported 26 local cases in a single day with Russia reporting daily rise in coronavirus cases in the past two months.

Chinese health officials said several virus cases in the country's north and northwest areas have been linked to cases from abroad with many located in border areas.

The virus has also spread to several cities in the current outbreak. Last month authorities in Shanghai Disneyland had closed the widely popular entertainment park after a single virus was detected. The authorities reportedly shut the visitors and workers inside and carried out mass testing.

The authorities had lockdown Lanzhou, the capital of Gansu province located in northwest China after a surge in virus cases. Domestic flights from Beijing was also barred as residents were asked to stay home.

Also Read: Zhang Zhan, who exposed China's mishandling of Covid, is close to death in jail

The authorities had also imposed restrictions in capital Beijing as new COVID-19 cases emerged as residents were told not to leave the city unless necessary.